Next day, developer appears to scuttle the process

After about an hour of back-and-forth with references to property rights, process, and PUD rezoning, the Cold Spring Planning Board and Butterfield LLC’s Paul Guillaro agreed Tuesday (May 8 convene a mini-workshop to try to resolve differences on such issues as including market-rate condos in the redevelopment. Less than 24 hours later, Guillaro potentially squashed such interaction when he told the Village Board he  was withdrawing his application to get the property rezoned – a key component of the type of mixed-use Planned Unit Development he envisioned, featuring housing, governmental offices, and commercial-retail quarters, with room for a post office.

“The project was an effort to meet what we believed to be the needs of the village and surrounding county for municipal government, health care, and senior housing,” he wrote in a May 9 letter, obtained by Philipstown.info through a Freedom of Information filing. “Our willingness to incorporate almost all of the recommendations and wishes of various boards and committees has been unsuccessful in moving this project forward. The approval process has become too consuming, costly, and frustrating from our perspective; therefore, the [rezoning] petition and applications are being withdrawn.”

That process, and his frustrations, clearly showed on May 8 when he and his associates appeared before the Planning Board – yet again.  The ultimate upshot: a decision to confer as a small, informal panel, out of public view (and without the quorum needed for a public meeting), to attempt to settle remaining questions.  Those include using Butterfield not only for the affordable apartments for modest-income seniors endorsed by the Planning Board but for the more upscale condos for retirees Guillaro terms economically essential to  his plan. “Without that our project doesn’t work,” he said. “There’s no reason to proceed unless we get the market-rate housing.”

Guillaro first sought a zoning change last December. Since then, numerous meetings have ensued, generating alternatives to his initial designs, revised versions of those alternatives, and feedback from residents, the Special Board for a Comprehensive Plan, and Village Board, which early on designated itself as the “lead” governmental review agency on the project. On April 24, the Planning Board abruptly rejected Guillaro’s plan for including market-rate condos, leading to Tuesday’s attempt to break the impasse by letting a small contingent thrash out details outside the limelight of a public session.

Even if he drops the rezoning petition, Guillaro could, under the property’s existing B4 zoning, still construct senior housing by obtaining a special permit. B4 zoning also allows a local government presence on the property. The Village Board has already discussed revising the definitions in the zoning code to ensure that other levels of government – town, county, state, and federal, including the U.S. Postal Service – could occupy the parcel as well. Such an arrangement could allow the developer to proceed with key elements of his conception, but hardly with everything he anticipated in his PUD.  [See Post Office Takes Step Toward New Home in Butterfield] 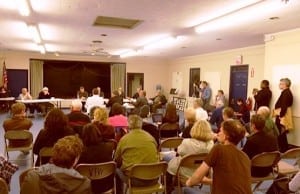 If all goes according to plan, the next attempt to reach agreement on the outlines of the Butterfield project will take place without a public audience.(Photo by K.E.Foley)

Although it began at the late hour of 8:30 p.m., Tuesday’s meeting drew an often stony-faced audience of 35, including two persons who appeared to video-record the proceeding. Minus Mayor Seth Gallagher (recuperating from a bicycle accident), the Village Board -– Trustees Bruce Campbell, Ralph Falloon, Matt Francisco, and Charles Hustis — attended, along with Village Attorney Stephen Gaba.

Richard O’Rourke, Guillaro’s lawyer, lashed out at the Planning Board for not explaining why it scuttled the market-rate condos. “Why is it a secret? If there’s no basis for it, it’s certainly arbitrary and capricious,” he declared. The board split, 3 to 2, on the market-rate vote two weeks ago. “Nobody’s saying it’s a secret. People are saying there are multiple reasons,” best discussed in a less fraught venue, Gaba assured him.

Guillaro expressed both his frustrations and his sense that only about five stumbling blocks divide him from the critics. Along with disagreements over  whether to permit the retiree condos at all, the items of contention include requiring that the homes be “fee simple,” that is, that they pay property taxes at the level charged comparably-priced new single-family residences, not at the much-lower rate charged condos; the extent to which the development must comport with the village’s Comprehensive Plan and Local Waterfront Revitalization Strategy;  whether to raze the old hospital; the location of the municipal building, and making renovation of The Grove a stipulation for letting Guillaro use its side yard for parking. The Grove is the historic but derelict 19th-century home, owned by the village, adjacent to the Butterfield property.

Guillaro observed that on a couple of those points -– the fate of the old hospital and the intergovernmental building location, the Planning Board had changed its mind at various stages. Referring to the property-tax issue, he simply said that “our project is senior driven. And fee-simple doesn’t work.” Similarly, he described restoring The Grove “as a losing proposition” and said that if he could use the side yard as a parking lot, it would serve the municipal building on weekdays and the Cold Spring Farmers’ Market on Saturdays.

Unless The Grove gets renovated as part of the deal, it “just becomes a bigger pile of bricks,” Planning Board Member Dick Weissbrod responded. “And the attraction of doing something with it is going to be a lot less if that [yard] is used for parking.” The board set no date for the discussion between its two representatives and Guillaro. According to Planning Board Chairman Joseph Barbaro, that hinges on individual members’ availability.

Engineering studies, property rights and pursuing PUDs
Guillaro objected to a suggestion that the Planning Board’s consulting engineer thoroughly review the assorted designs and report back.  “I think it’s going to waste time. There’s no benefit. I think the engineer has already reviewed our plan and this board doesn’t like our plan. I’d like to get a conceptual plan we can all agree on, before we incur any more engineering costs,” he said. The idea of an informal small-group workshop to try to make progress ultimately evolved.

Before that happened, O’Rourke raised the spectre of violations of property rights if Guillaro is thwarted. He said that the usual process for addressing a petition, like the one they made five months ago, for a PUD mixed-use complex, is that a municipal planning board makes a prompt evaluation of the rezoning request and shares its views with the governing town or village board. Yet in Cold Spring, he said, the process grew to include multiple designs and meetings and “a pretty remarkable participatory process” involving local citizens. Instead of weighing in on the rezoning, the Planning Board immersed itself in the minutiae of site-plan review, poring over architectural designs for the development, he said. “The proper framework got lost in this shuffle,” O’Rourke maintained. ”One of the hallmarks of property law is that the property owner has certain rights. You’re certainly entitled to your opinion, but he [Guillaro] certainly hasn’t checked his property rights at the door of the village hall.”

“We did it the opposite way” from O’Rourke’s course of action in order to evaluate whether the whole thing made sense for the property, before taking up the matter of rezoning Butterfield to accommodate it, Barbaro replied.

There are “a few items I need some decisions on,” Guillaro emphasized.

“Let’s proceed, everybody, get together,” and work on those, Weissbrod urged.