Board sees suburbia instead of historic village

Cold Spring’s architectural gatekeepers told Kenny Elmes and Dunkin’ Donuts to go back to the drawing board Wednesday night (May 9). The village’s Historic District Review Board (HDRB) indicated the applicants need to make significant design changes to gain approval for conversion of the Elmesco Citgo auto garage into a franchise of the multinational coffee-and-doughnut company. “I’m guessing that if we took a vote [tonight], this would not be approved,” HDRB Chairman Al Zgolinski advised Kenny Elmes and his architect, Cynthia Falls. Elmes brought Falls in as a personal consultant for his project, conversion of his car-repair shop and gasoline station into a Dunkin’ Donuts drive-thru and convenience store, retaining the gas pump operation.

Among other concerns, HDRB members expressed reservations about plans to sheath the current building in a stucco and brick veneer and add a vinyl Dunkin’ Donuts mural to the exterior. They said they found the intended refitted structure to be more compatible with suburbia than a 19th-century village. “I look at this and see Fishkill. I don’t see Cold Spring,” Board Member Kathleen Foley told Elmes and Falls. “It just doesn’t read ‘village.’ It reads ‘suburbs.’”

“Absolutely,” HDRB Member Carolyn Bachan echoed. “It comes across very suburban and to me the stucco says ‘utility buildings,’” because such finishes typically appear on vehicle repair garages and public utilities, she said. While the Elmesco building now functions as a garage, if it becomes a Dunkin’ Donuts its garage functions will cease, but it will have a utilitarian stucco covering, she said. She also said that the design suggests that the entrance leads to a Dunkin’ Donuts coffee shop but instead the doughnuts will primarily be dispensed at the drive-thru window and the interior will be a convenience store mini-mart. With the signage and appearance, “it announces it as a Dunkin’ Donuts,” she said. “It doesn’t announce it as a mini-mart. I find that terribly confusing in architectural terms.” 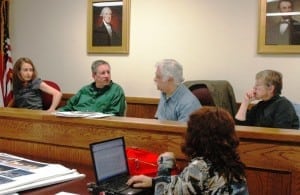 Another board member, Peter Downey, pointed out that the exterior “is a brick veneer, which we’ve never approved.” Typically, the HDRB directs applicants to use real bricks, not a brick-look covering or veneer. “I like the idea of it being all brick,” scrapping the stucco as well, Downey said.

“If we haven’t approved a brick veneer on a residence I don’t see how we can approve it on a commercial structure,” Foley observed. “It’s a matter of parity and fairness.” She also noted that “there seem to be a lot of design elements contingent upon approval of the drive-thru” by the village Planning Board, which also has the project under review.

Elmes said that in addition to other considerations, having a coffee-shop type establishment with tables and chairs would exacerbate parking difficulties in that section of Foodtown Plaza. “It’ll be like the Main Course over there. There’s accidents all day long,” he said. A neighbor of his garage, the Main Course, a gourmet food carry-out, also serves morning coffee and pastries, with a few tables for patrons. Overall, though, he said, “we’re pretty flexible. We want to make as many people happy as possible.”

Falls told the board that changing the design complicates finances. “There are expenses involved, which I have to discuss with the client,” she said. “To try to do a whole brick building or something is not viable for us.” However, Falls offered to tinker with the architectural designs to address the HDRB’s concerns. She and Elmes likewise agreed to meet with the HDRB at a workshop on May 23 to go over the updated drawings and wrangle over details.  At some stage, too, “we’re going to have a public hearing because I think there’s a lot of interest in this,” Zgolinski promised. “We won’t get into any serious discussion until after the public hearing. We’ll let the public have their say. Then we can move forward from there.”
Photos by L.S.Armstrong