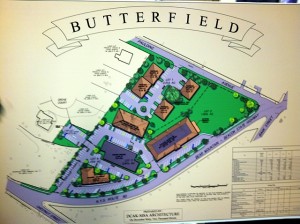 The Cold Spring Village Board Thursday (May 10) briefly touched on the highly charged topic of the Butterfield redevelopment after developer Paul Guillaro’s sudden pull-back from the project on Wednesday left elected officials and residents wondering “now what?”

As Mayor Seth Gallagher recovered from a bicycle accident and other commitments kept Trustee Ralph Falloon away Thursday, the board postponed decisions on several agenda items until the full board reconvenes. Nonetheless, those present could not avoid the number one topic of the week: Butterfield. Trustees Bruce Campbell and Matt Francisco led the discussion while Trustee Charles Hustis listened.

Last Wednesday, less than 24 hours after a May 8 go-round at the Planning Board, Guillaro announced the withdrawal of his petition for a rezoning to permit construction of a mixed-usage Planned Unit Development at Butterfield. The developer, of Butterfield Realty LLC,  cited the prolonged process and frustrations involved, but his retrenchment came as a surprise: On Tuesday night, shortly before the Planning Board adjourned, he had agreed to confer with a couple of Planning Board members (instead of that whole board) to tackle what he termed a handful of remaining differences. One involved condominiums.

Two weeks earlier, on April 24, the Planning Board had abruptly voted against having upscale, market-rate retiree condos at Butterfield, favoring inclusion only of apartments for lower-income seniors. Guillaro termed the market-rate homes vital to the project’s viability. They had been part of his design since he unveiled it at a Village Board meeting last October. His plans also featured an intergovernmental municipal building – of avid interest to the village, Town of Philipstown, and Putnam County — and commercial-retail space, with room for the post office, whose lease at the Foodtown Plaza, across Chestnut Street from Butterfield, expires Aug. 31.

“The Village Board was definitely disappointed” by Guillaro’s latest decision, said Campbell, who presided at the meeting in his capacity as deputy mayor. “I did contact Mr. Guillaro to say we’re hoping we could definitely keep the dialogue going with him. He was disappointed himself. He was hoping to work something out with the Planning Board.” At the Tuesday meeting, Campbell pointed out, “there still was a couple of stumbling blocks, [things] Mr. Guillaro really needs to have happen within that plan.”

“It’s an unfortunate turn of events,” said Trustee Matt Francisco, the Village Board liaison to the Planning Board. “Obviously, people were trying to move the project along. It wasn’t moving fast enough from Mr. Guillaro’s perspective. We’ll have to wait till we have further information as to what the next step is.” Campbell concurred. “Basically that’s the way it’s going to stand for the time being,” he said.

Although Planning Board members have been scrutinizing Guillaro’s proposal – with ample comment not only on his plans but on their preferences on what to put (or not put) at Butterfield — the Village Board is the lead governmental review agency. “Everyone knows the Village Board is the lead agency. I think that being the lead agency, I would like to get some comments from the Planning Board,” Campbell said. Given “all the work, all the meetings, all the people’s comments on that whole project, I would think we would definitely have something planned for the near future, just to open up the dialogue with Mr. Guillaro.”

Likewise, he said, the board so far has no “Plan B” for saving the post office. That too, “is one of those things we have to talk about in the very near future,” Campbell said. “There’s definitely concern. It’s a never-ending battle, what we’re going to be doing with the post office and where it fits into the equation. It’s all part of the Butterfield project as well as the Foodtown project.” The Foodtown grocery wants to expand into the space at present occupied by the post office –- hence the desires to relocate the post office to Butterfield.

In other business, the Village Board received a memo from the Special Board for a Comprehensive Plan-Local Waterfront Revitalization Plan (LWRP) asking the mayor and trustees to provide guidance on prioritizing projects to pursue as part of a Local Waterfront Revitalization Program, over the course of 20 to 30 years. The possibilities include creation of an Overlook Park at the present village garage site and enhancing Dockside Park; ferry or excursion boat services at the riverfront; trails, sidewalks, and a river walk; burying utility lines on Main Street; dredging the bulkhead at the Cold Spring Boat Club; and metered parking, safety, noise pollution, and garbage collection-recycling.

The memo reminds the Village Board that one reason for Cold Spring’s failure to gain New York State backing for an attempted waterfront revitalization program in 1990 was no foresight on projects to undertake with support. Furthermore, the memo states, a pending agreement with Albany for the current LWRP demands specific examples of “long-term land and water uses,” including “improved public access,” to undertake for the riverfront and adjacent village. Defining certain projects as serious LWRP goals “will help attract grant funding, garner further public support” and provide other benefits, the Special Board wrote.

Campbell alluded to the appeal of an Overlook Park. “I know a lot of people feel it should be something happening faster than others” on the list, he said. However, he cautioned, it involves “seven to ten items that probably have to be looked at independently -– safety, what would happen to the current site for village garage employees and their whole operation down there, the county operation with the salt,” and more. (The county stores salt at the garage.)

Last year, in workshops as well as on a rare tour of the site, local residents frequently endorsed the concept of public park space at the garage, which occupies a bluff with sweeping views of the Hudson River and Highlands but currently is off-limits to the public. Campbell and Francisco suggested a joint Village Board-Special Board workshop in the near future to consider options.

During the public question period, Tony Bardes, president of Citizens of Philipstown, asked about video-recording Planning Board meetings, as it does monthly Village Board meetings; he said he thought the Village Board had agreed to do so some months ago. His organization, COP, provides the videos to news media, including Philipstown.info. At the least, the village might record Planning Board sessions dealing with the Butterfield project, he suggested. “It’s an important thing.”

“It’s a very large issue,” Francisco responded. He said that the Village Board had decided to record joint Village Board-Planning Board meetings, not those of the Planning Board alone. Nonetheless, he was amenable to further consideration of the question.  Campbell, too, seemed favorably inclined. “It’s a good idea; thanks,” he told Bardes. “We’ll have to budget for it, of course.”