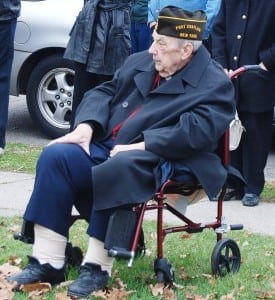 Father John G. Mills, rector of St. Mary’s Episcopal Church in Cold Spring for three decades, died on Tuesday morning (May 15) in Hudson Valley Hospital Center after being in failing health for several years. Mills, 92, served at St. Mary’s for three decades before retiring in 1992.

He arrived in Cold Spring on July 29, 1961, to confront a disaster: The church smoldered from a devastating fire, set by youngsters two days earlier that had destroyed the historic roof, ruined the interior plasterwork around the altar, wrecked the organ, charred beams and woodwork, and cast black soot over everything. The two or three youths responsible were believed to have similarly attacked Our Lady of Loretto Roman Catholic Church in Cold Spring a week earlier, though that fire was put out before damage occurred. Mills immediately set to work repairing St. Mary’s. “Those grotesque embers or remaining bits of flame greeting Fr. John appeared not as a defeat but a challenge to marshal the courage to change that which seemed unchangeable,” Donald MacDonald, a long-time parishioner and local historian wrote in the parish newsletter in 2003. “The will to do so was exactly what Fr. John brought with him.” And, of course, St. Mary’s rebuilt and continued to thrive.

Born and raised in Canada, Mills later moved to the United States and served in the Pacific in World War II before taking up his duties as a priest. Along with his clerical role at St. Mary’s, he sometimes played the church organ and helped out in other capacities and was active in the Cold Spring Fire Company No. 1. Last December, his fellow firefighters presented him with a plaque recognizing his 50 years with the company. After his retirement, he and Margaret Mills remained in Cold Spring and in his later years he attended services at Our Lady of Loretto.