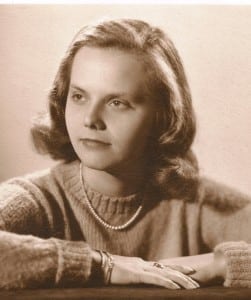 Lucille Grow, PhD, died peacefully on January 26, 2012, at the age of 90. Lucille lived in Cold Spring for 15 years. Lucille’s good friend and housemate, Toni Bernier, predeceased her in 2010. Lucille is survived by her godchildren and cousins, Jim, Anne and John, and cousins James, Geraldine and Martha. Lucille’s friends and family will miss her.

Lucille was born November 8, 1921, in Cleveland, Ohio, the child of Eleanor and Maurice ‘Pete’ Grow. Pete operated a fishing business on Lake Erie. One of Pete’s workers was Ed Bodi, father of Lucille’s godchildren. Lucille first met Jim in 1937 after a harrowing trip to the hospital to pick up Jim when he was born. Lucille screamed, “Uncle Ed slow down. You went through three red lights,” while Ed waved his hands around to describe how big his boy was.

Pete moved his business to Grand River, Ohio, with a home in nearby Mentor. Each summer, Jim, Anne and John looked forward to their visit to Mentor. Lucille would sneak onto their train at Cleveland, and walk through it until she found her godchildren hiding in the luggage racks. Lucille took the children on many excursions. A favorite was Euclid Beach Amusement Park where Lucille gave each child $2 for the day.

Lucille received her BA in 1943 from the College of New Rochelle. Social work was her avocation. She earned a Master’s degree and progressed from case worker to supervisor to borough coordinator in New York City and Cleveland. In New York, she rode the subway to visit clients in their homes and in institutions throughout the City.

A Fulbright Grant in 1957 for study at Liverpool University encouraged Lucille to focus her research on challenging families. In New York, Lucille earned a PhD in Sociology. She received grants to study such unexamined subjects as the outcomes for children of young mothers, and trans-racial adoptions. She travelled extensively, collecting data and presenting her findings. She also assisted in an alcoholism study with Yale and New York Universities and continued doing research for the Child Welfare League of America.

Lucille was a visiting lecturer at Hunter College. Then, in the 1970s, she became a full-time professor in the Master’s and Doctoral programs at Yeshiva University. During that time, she authored or co-authored several books on childrearing, adoption, unwed mothers and foster care.

There will be a memorial celebration for Lucille on Saturday, May 19, at St. Mary-in-the-Highlands, Cold Spring. Gathering will take place at 9:30 a.m., Mass at 10, followed by luncheon.