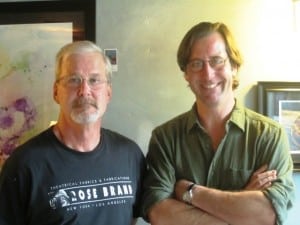 Brothers playing brothers.  It happens sometimes in the movies: Jeff and Beau Bridges bickered and bonded portraying The Fabulous Baker Boys, and now it is happening at the Depot Theatre as real-life brothers Donald and George Kimmel portray half-siblings Witwoud, and Sir Wilful Witwoud in the World’s End Theater’s production of Congreve’s The Way of The World.  It’s not the first time on stage together for these fraternal thespians. Back home in Kentucky, George once swaggered his way through Captain Hook with Donald as young Michael Darling in Peter Pan, and shuddered through The Wizard of Oz as the cowardly lion, with (the younger) Donald as a munchkin.  In youth, age brought the privilege of the leads to George, while now they share in the spoils of a rich tapestry of roles in Way of The World, which has nominal main protagonists but is ultimately an ensemble piece, with the brothers Kimmel taking on two of the more flamboyant roles of yokel and fop, key players in the chicanery and buffoonery, and major laugh-getters, the pair of them.

Part of a true ‘band of brothers’ — their mother likened raising four boys to “being in a locker room or army barracks” perpetually. Donald and George played their roles in “a theatrical household, though not in the traditional sense — dad was a stockbroker,” says Donald.  Their early theatrical training came through the fortuitous arrival of Nancy Sexton to the town they were raised in.  Trained at the University of Kentucky and Yale School of Drama, Sexton married a neurosurgeon and settled in Anchorage, the same small town outside of Louisville as the Kimmels.  Bored, she began directing, and founded the Walden Theater in their town (it is now in Louisville proper), and produced the first Shakespeare festival by and for young people in the country. She eventually founded her own school, where both boys studied, Donald retaining some of the acting exercises initially learned there for use today in the acting classes he teaches now at The Actors’ Habitat, which he co-founded.  Of their first teacher, George says, “She didn’t settle for less than anybody’s best effort, and she extracted great performances with a real spark.” 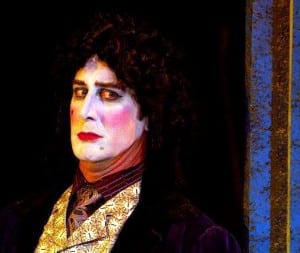 Donald recalls playing Puck — “not bad for an eight-year-old,” turning to George he adds, “I was ably coached by someone of more experience.  It will come as no surprise to people who come to see this show that George was always an energetic and imaginative performer.  There was a lot to emulate.”  George wound up a theater major at University of Kentucky and continued on to work at the Actors Theatre of Louisville; Donald followed a similar path.  Prior to their current on-stage reunion, they also appeared together, as young adults in The Lady’s Not For Burning in Louisville and, later on, in a New York City production of Chekhov’s Ivanov.

At a certain juncture, the brothers decided to make the big move to New York City together, led by a desire to expand their work in theater, and go where that work was, as the Actors Theatre was then the only professional theater in Louisville and couldn’t provide them with enough. “The plan was for the Kimmel brothers to take New York City by storm,” recalls Donald, with George quickly countering, “No, the plan was to find a way to survive.”  Survive they did, but instead of the traditional struggling actor’s route of waiter and caterer, Donald became a stagehand, while George became a house painter.  Today these skills still provide them with revenue-earning trades with which to support their artistic endeavors, as one of Donald’s jobs is that of technical director at the Depot, while George is a painting contractor in Beacon. If you want to call him his cell# is 845-214-5931.

A first love for both remains theater. George keeps his hand in things doing Unrehearsed Shakespeare, which he calls a lot of fun, and Donald is a founding member of World’s End Theater and appeared in last year’s production of The Seagull as Dr. Dorn, a character about 180 degrees removed from the one he is playing now.  Both tread the boards when time, life, money allows, and handily this has happened with The Way of The World wherein Donald, in full make-up, including rouged cheeks and very red lips, plays the fop and George, in a wig which may or may not bring back the flattened middle part for men, his rustic half-brother Sir Wilfull Witwoud. 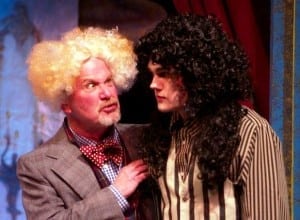 Asked what aspect of each other’s character most closely resembled the real brother, Donald replied first, “One of the most striking things about Sir Wilfull is his strong assertion of intent; Willful will do it — hence his name.  That’s something I’ve seen in brother George for many years.”  George interjects, “I’ve been known for being hard-headed.” Donald continues, “For instance, several years ago, George and his wife were driving through a howling blizzard from New York to Louisville.  George had said at the start, ‘We’ll be there at seven o’clock.’  The rest of our family was in Louisville, watching weather reports and seeing snow blowing sideways.  We knew there was no way he’d be there and that they’d have to overnight somewhere.  At seven on the dot, he pulled into the driveway.”  George on Donald: “Donald’s not much like Witwoud.  Witwoud is a poseur.  After [England’s] Civil War and Cromwell, with the monarchy restored, they brought in the manners of the French court, with make-up and cleverness.  Witwoud aspires to be clever.  Donald has never been a slave to fashion.  He always has a bon mot of his own, and hasn’t relied on other people to supply, but — he has a keen eye for who the poseurs are.”

George and Donald just love their parts, partially because, as George puts it, “We don’t drive the play; we come in and scoop out the gravy.”  Describing his character, George notes, “He’s the guy from the country; he doesn’t go in for all the mannered affectations currently popular.  He’s rough around the edges at best.” At this Donald gives some praise, “I knew George could just eat that part for lunch — and he does.”  Donald had his auditioning eye on the part he is now playing, having prior experience in fop-dom, “I played a lot of fops in earlier days.  In high school, when I was 13 or 14, the seniors got the big parts and I did things like Touchstone in As You Like It.  But I haven’t done one of those roles in a long time, so this is a lot of fun.”

And whom, in contemporary life, might these two characters equate to, considering the timelessness of the play?  George has a quick response, “George Steinbrenner, definitely.  Or, in terms of Washington, Ron Paul — the rude guy from the country with crazy ideas which might seem good at first glance, but when you consider them, probably not the best way to go.”  Donald considers it for a bit longer, then replies, “Truman Capote — although he had more to back him up — but he had a need for appreciation and a longing to be loved for his wit.”

Both brothers urge everyone to try to make it to one of the seven remaining performances, this weekend and next, saying, almost in unison, beyond everything, “it’s fun” with Donald adding, “It’s visually so striking, with lots of excellent comic turns.” George praises the distaff side of the cast, “the ladies are just wonderful, all of them.” Donald sums things up, “Having fun, that’s what I got in it for.”  Getting the last word(s) is the elder brother, who pipes in a “Me too!”

The Way Of The World continues at the Depot Theatre through May 27.  Performances are this Friday and Saturday, May 18 and 19 at 8 p.m. and Sunday, May 20 at 4 p.m. continuing from Thursday to Sunday the following week, 8 p.m. except a 4 p.m. matinee on Sunday, May 27.  Tickets are available online at Brown Paper Tickets  or by calling the Depot, 845-424-3900.  For more information on World’s End Theater, visit their website.