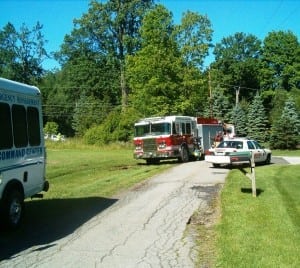 A fire on Route 9D and a head-on car crash on Route 9 split the resources of the Garrison Volunteer Fire Company (GVFC)  this morning (May 17.) Garrison Fire Company Chief Bill Rimm told Philipstown.info that “as they were responding to a fire on Spruce Lane” a call came in about an automobile accident on Route 9 at Frasier Road (near The Garrison golf course.)

The first incident, a fire at a home on Spruce Lane (south of Philipstown Park) was contained by 9:30 a.m. There were no injuries, but the homeowners and GFC declined to comment on the possible cause and extent of the fire.

The second incident, a head-on automobile crash on Route 9 was cleared by 9 a.m. Rimm told Philipstown.info that there were injuries and that some were transported by helicopter to area hospitals. Both roads were reopened, with traffic flowing freely, by 10 a.m.