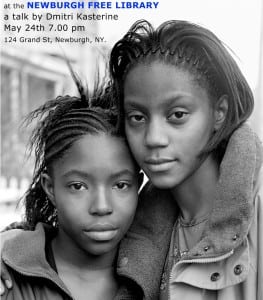 Read a Philipstown.info feature story on these photographs.

Garrison photographer Dmitri Kasterine will talk about his soon to be released book, Newburgh: Portrait of a City on Thursday, May 24 at 7 p.m. at the Newburgh Free Library. The book features photographs of the people of Newburgh, where he has been taking pictures over the past 16 years. He will also talk about his plans for an exhibition of mural-size prints on the wall of the Ritz Theater in downtown Newburgh. The exhibit is expected to coincide with the September publication of his book by W. W. Norton. To see samples of the photographs, go to his website.

“The idea was to do something that allows the citizens of Newburgh free and constant access to the display,” said Kasterine. Tricia Haggerty Wenz, founder of Safe Harbors of the Hudson and owner of the Ritz Theater, looked at the pictures and said, “Great, use my wall.”

During his many recent visits to Newburgh to videotape activities, Dmitri reports that he and his wife Caroline and their dog Louis have been shown nothing but warmth and approval for their endeavors. But what impressed them most was the concern from citizens they spoke to that this exhibition must take place. It will show the world, they believed, that despite their difficulties, they will prevail.

Dmitri has spent 50 years doing portraits of the famous and the unknown both in this country and in England. Amongst his best-known portraits are those of Mick Jagger, Steve Martin and Stanley Kubrick. For information, call the Newburgh Free Library, 845-563-3619 for programs or 845-563-3600 for the main number.