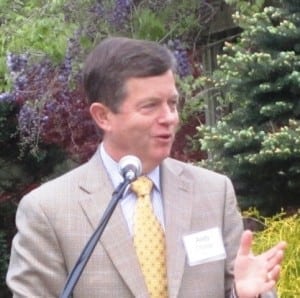 Nature lovers in general and those dedicated specifically to preserving avian, mammal and marine habitats, came together to “celebrate the outstanding efforts of Constitution Marsh Audubon Center and Sanctuary,” and also to honor Andy Chmar, the executive director of the Hudson Highlands Land Trust (HHLT) at a recent gathering at the home of Ralph and Robin Arditi (an advisory board member of the Marsh) in Garrison.  This annual spring party serves as a fundraiser for Constitution Marsh. 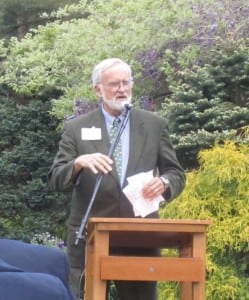 In the verdant setting of the gardens behind the Arditi’s house, event co-chair Fred Osborn welcomed a large crowd of supporters, and spoke of the party’s three-tiered purpose: “we’re honoring a great organization; paying tribute to Connie and presenting an award to Andy.” In referring to Connie, Osborn meant Constantine Sidamon-Eristoff, longtime conservation steward, environmental advocate and former Audubon chairman who passed away last December. 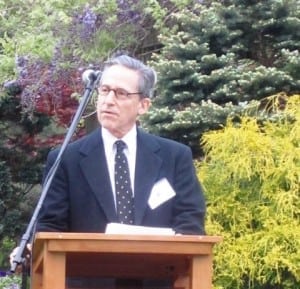 Dr. Peter Hofmann, the other co-chair, reminded the audience that the Marsh serves as an education center for those from kindergarten to the graduate level.  He made reference to a new initiative, the Sandy Freeman fund, started this year, which will provide internships for college and graduate students.

Al Caccese, executive director of Audubon New York, which represents 27 chapters and over 50,000 state-wide members described Sidamon-Eristoff, as “our founding chairman, a dear man … a hail fellow as comfortable talking to governors as to the blue collar workers who did all the work.” Caccese noted too, that Sidamon-Eristoff “loved the Marsh — the staff, board — he always spoke of the staff and board’s intelligence and dedication.”

In accepting the accolades for the Marsh staff, center director Eric Lind called himself “privileged because I get to work there — the shoreline of the Hudson River … the whole river is a breathtaking place.  The only thing that outshines it is the staff I work with: Rebecca, David, Rich, Connie, Max, Jackie.  We all share a deep responsibility to all of you, our supporters and fundraisers, to do good work.” 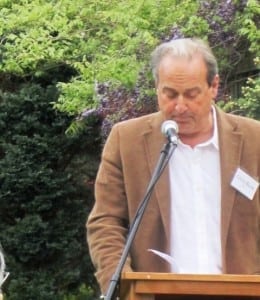 Chris Buck, vice-chairman of the  Board of Directors of the HHLT and prominent land conservator who has just developed the Winter Hill complex restoration, which now houses several local nonprofits including the HHLT and the Garden Conservancy, called Andy Chmar “a diplomat, whose job requires him to work in a difficult area; vision is requisite.  As part of that vision Andy has an appreciation of bringing that appreciation to the next generation.  He operates in a larger sphere; he is the glue.”  Buck gave a brief overview of Chmar’s career, noting his 1977 graduation from West Point, a 21-year Army career, which included senior positions in logistics and operation management, leading to the rank of colonel. Chmar also earned an MBA from Harvard Business School. 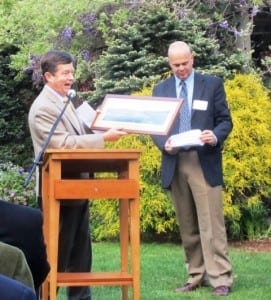 To applause, Chmar thanked Buck “for the wonderful introduction — don’t know who you were talking about, but it was wonderful.”  Speaking first of his staff, whom he introduced, Chmar said “there’s a perfect correlation between people you work with and the results.  They are the heart and soul of the HHLT and they are why we succeed … Remember the Venn diagrams?  Our staff sits in the center, between our 30-member board, which guides us and then gives us the autonomy to do the work.  Also, our environmental educators are in a ring: Irene, Pete, Lisa, Andrea.  They introduce kids to nature and get them outside.  Our great volunteers help lead our hikes and extend our reach into the community; Eric did one yesterday.  This allows us to create dynamic, programmatic results.  The biggest ring, which surrounds all the rest, is our incomparable supporters who provide us with the resources needed to conduct our business on your behalf.”

Concluding, Chmar quoted a passage from a letter he and HHLT board chairman Chris Davis sent in an annual appeal:

Ultimately, our decisions on land use and other finite resources, not only define the values of our generation, but will determine the quality of life for generations to come.  Thus, irrespective of outside forces, whether economic or political, we continue our work with an urgency born of awareness that the damage wrought by inappropriate or haphazard growth can suddenly and irreversibly destroy the character of a community, and do so for generations. 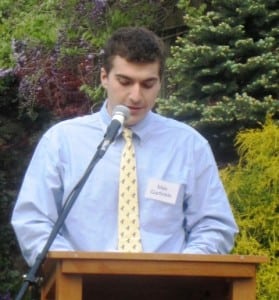 Chmar was followed by University of New Hampshire (UNH) student Max Garfinkle, a former Philipstown Garden Club intern at the Marsh.  Garfinkle spoke of the difficulties in pinpointing a highlight of his time there.  “There was no sole experience in the eight years I spent there as an intern and then a volunteer.  It pushed me to learn, moving me away from areas I was comfortable in.  I called the Marsh when I was 12 years old, offering to lend a hand on small projects.  I had no idea how much that summer would influence my life.  The experiences were countless; I helped control invasive species, maintained trails, rode on Riverkeeper, helped the Audubon Center with projects … it guided me down my education path at UNH and a career in conservation.  They really are my friends and mentors.  The beauty of a place like the Marsh is it’s for everyone, from artists to camp groups, birders, foreigners, locals who hike the trails.  You don’t have to be a scientist to appreciate it; it is for everyone.” 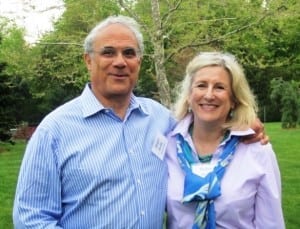 Garfinkle’s speech added another dimension to Fred Osborn’s formal announcement of the Sandy Freeman fund, which will be used to create a scholarship to pay interns, some of whom will be post-graduate, to come to the Marsh.  Freeman, who died last year, was a Marsh advisory board member, and the fund has been established by her family; $93,000 has already been raised. Cajoled by famed auctioneer David Redden, partygoers were asked to contribute to the fund. In a live bidding session, hands flew up in support of the cause, with monies matched by Sandy Freeman’s widower, Rob. “We’ve done very well for an honorable cause and keeping Sandy’s memory alive,” Fred Osborn noted.
Photos by A.Rooney

One thought on “Andy Chmar Honored at Marsh Gala”