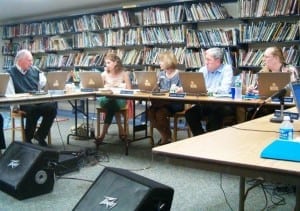 Unedited recordings will be available online

Responding to a request from the Citizens of Philipstown (COP), the Garrison Union Free School (GUFS) voted unanimously to allow videos of its board meetings to be posted on the COP website.

In her opening remarks, Superintendent Gloria Colucci told the board that the school’s attorney advised her that the videos were public and that copies could be requested via the Freedom of Information Law (FOIL.) Under FOIL, the board is required to provide an unedited tape and would have no say in how and in what format it might be used.  Currently videos of board meetings are broadcast on cable television. The decision, made at yesterday’s (May 23) meeting prompted a discussion of the current and future broadcast of the board’s meetings.

Trustee Jim Cannon expressed concern that meeting videos (posted by others) could be used to “misrepresent things.”  Cannon also said that current cable television broadcasts end after two hours, regardless of the actual length of the meeting. “There may be important things being discussed,” he said, after the arbitrary ending. He suggested that the board’s attorney might be mistaken in his appraisal of whether GUFS was obligated to provide copies of meeting videos. Vice President Raymond O’Rourke responded that, “we may have no choice . . . we have to rely on the advice of our counsel.”

Lee Erickson, speaking on behalf of COP, encouraged the board to post on the COP website. Erickson told the board that COP already posts videos of the Haldane Board of Education, the Cold Spring Village Board and the Town of Philipstown: all unedited and in their entirety. He pointed out that “viewers can see all of Philipstown” in one place.

Response to Intervention (RTI) is a state-mandated program intended to track students’ academic progress. Colucci told the board that RTI is a “clearly defined path for students with special needs.” Under the program, students are evaluated in the fall, at the start of the new year and at the end of the term. The data gathered will be used to identify and remediate student academic issues and will also form part of the new teacher/administrator evaluations. The RTI program also requires that teachers and administrators be trained to assist students “at either end of the spectrum” and to understand and use the data collected.

Colucci said that while RTI, as defined by the state, is focused on special education students, GUFS will also be using the process to identify students that are performing above grade-level, as part of the board’s goals to provide differentiated learning opportunities.

Rowe was enthusiastic that “the plan applies to all students” and goes beyond the state mandate. Trustee Christine Foertsch noted that “special ed [ducation] is clearly defined” but that “pathways for middle and advanced students are not as well defined.”

Colucci replied that GUFS was required to implement the special education portion of RTI by the end of this coming June and that has been the district’s focus. “Work will continue, “Colucci said, “for development of other aspects” [of the plan.]

The board discussed the continuation and expansion of the pilot program to provide teachers with iPads. Colucci told the board she will be meeting with a consultant to determine how iPads can be further integrated into the classroom and whether any savings could be achieved by a decision (by the board) to proceed with iPad technology. A presentation by teachers, at an earlier board meeting, demonstrated how iPads are currently being used in the classroom.  A major drawback is that they are stand-alone, un-networked devices. Teachers said they worked well for small group instruction but not as well for the full class.

This led the board to reopen the idea to provide each student with a laptop or iPad.  Board consensus is that this would be a good idea, but that it would be prudent to proceed cautiously. Newly elected Trustee Theresa Olandi said that these devices will provide an advantage to students “providing access to periodicals” and other information, in addition to what is provided in textbooks.

One thought on “GUFS Allows COP to Post Meeting Videos”