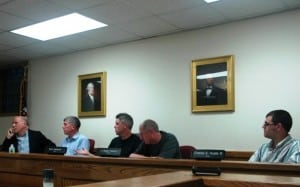 Cold Spring’s Village Board Tuesday night (May 22) took steps to revive the Butterfield redevelopment project through creation of a “conceptual rezoning” for the tract, instead of more ambitious Planned Unit Development rezoning for the seven-acre site. The move came in a round-about way: Specifically, the board voted 5-0 to ask the village Planning Board for its input on a conceptual rezoning.

Butterfield Realty LLC, which owns the property, on May 9 withdrew its request for a rezoning to allow a PUD featuring affordable apartments for modest-income seniors and more upscale market-rate condominiums for wealthier retiree-age residents alongside an intergovernmental municipal building and retail-commercial space, with room for a post office. In abandoning the PUD request, Butterfield Realty’s Paul Guillaro cited frustrations with a cumbersome approval process, after spending months before the Planning Board. He told Philipstown.info May 17 that “there are no plans at all for Butterfield as of right now.” Nonetheless, according to Mayor Seth Gallagher, Guillaro recently expressed willingness in explore ways to resurrect the project.

As outlined by Village Attorney Stephen J. Gaba,  to get things moving again, the village government could undertake “a conceptual zoning change, instead of a PUD” to accommodate desirable redevelopment components. On April 2,  the Village Board discussed revising Butterfield’s existing B4 zoning to allow not only village government offices, which existing B4 zoning permits, but a facility of any level of government –-  town, county, state or federal, including the U.S. Postal Service, whose lease at the Foodtown Plaza ends on Aug. 31.

In a May 7 letter to the Planning Board, lawyers for the FoodtownPlazadeveloper, Constantine Serroukas, announced that Serroukas would not extend the post office lease, was ending his effort to provide a new post office at the FoodtownPlaza, and intends to expand the grocery into the old post office space after Aug. 31. Philipstown.info obtained a copy of the letter, not previously made public, after Gallagher Tuesday night referred to Serroukas’ action. It means “now we have only one possibility for a post office” — the Butterfield property, Gallagher said at the Village Board meeting. The Butterfield property lies acrossChestnut Street from theFoodtownPlaza.

Gallagher said Wednesday (May 23) that the “conceptual rezoning” could provide for the intergovernmental building and post office, some of the ideas suggested at the April 14 public design workshop or charrette, and senior-citizen housing, whether apartments for modest-income residents, condos for more affluent buyers, or both, with due weighing of what’s best for Cold Spring. “If both are an option, then allow that,” he proposed.

Gaba told the Village Board that it could proceed with a conceptual rezoning change for Butterfield without having an active application from Guillaro. Under the village zoning code, a B4 district at present can only contain health facilities, single-family residences, churches, schools, libraries, and village government offices, parks, home-based occupations (such as teaching music out of one’s home), and, by special permit, senior citizen housing.

The Planning Board voted 3 to 2 against inclusion of market-rate condos in Guillaro’s complex. With a B4 district, though, “if the zoning allows it, then they [Planning Board members] don’t have any choice” and must accept it, Gaba noted.

Trustee Matt Francisco expressed concern that the B4 zoning could permit a four-storey building at Butterfield. Yet the village government could craft PUD zoning with more clout, spelling out exactly what the village condones, and forbids, at the Butterfield site. “So we need to understand the risks” of favoring B4 zoning “and understand what we’re doing and what we give up” by not seeking a PUD. However, “I think the developer doesn’t want to go through the pain” of continued pursuit of a PUD, he added.

“It’s going to be difficult to come up with a PUD law,” Gaba acknowledged.  The attorney said that the village government could impose limited conditions on B4 construction, using a developer’s agreement, similar to a restricted covenant.  Gallagher recalled that Guillaro “has said he is willing to reduce the height of the buildings or whatever,” to reflect village wishes. “I think he does want to go forward. He was interested in getting together with the board,” but only after there’s something substantive to discuss, the mayor said. “He wants a constructive meeting, as opposed to one without achieving anything.”

Turning to water-related matters, the board voted unanimously to authorize Gallagher to work to clarify the village stake in Jaycox Pond, outside of Nelsonville, a potential village reservoir. In 1922, the village received an easement and interest in land at the pond, as well as use of pond water, Gaba told the board. But the deed failed to define the precise piece of land conveyed to the village where pond access might occur, he said. Along with the village, the prospective settlement would involve the current pond-area landowners, Yung and Ming Wang, as well as the Hudson Highlands Land Trust, Gaba explained. “It is, I think, a very good deal for the village,” he said. “We know there’s some rights there,” he said, although sticking points remain, including “the issue of ownership of the dam” at the pond. In the 19th century, the pond served the West Point Foundry, which used water-power to run machinery.

The board also agreed to finalize a contract with New YorkStateto permit it to get $27,000 for work on the pending Local Waterfront Revitalization Plan, or LWRP. “If you want that government money, you must agree to this contract,” Gaba said, summing things up.

One thought on “Maybe Rezoning Can Revive Butterfield”