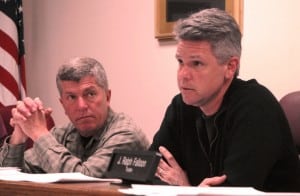 Seeking to rescind Cold Spring Mayor Seth Gallagher’s $2,500 fiscal 2012-13 salary increase, an online petition had generated 107 signatures by Friday afternoon (May 25) as well as claims of impersonation and dubious names. The effort began the week of May 14 and, according to its introduction, “is important because the Board of Trustees gave the mayor a 22 percent pay increase without allowing for public comment.” An elaboration added that “if you live in the Village of Cold Spring, your vote will send a message to the five elected officials that this behavior is unacceptable and contrary to open government.” The update invited “all taxpayers,” throughout the state and beyond, to participate, too. Some did – from Cold Spring and beyond.

Michael Bowman, the petition originator, told Philipstown.info Friday afternoon that the burgeoning support “doesn’t surprise me at all. I had dozens of people approach me who were disgusted about the way the pay raise was introduced and pushed through (and that was before the petition). Since the petition that number has exploded.” He said he intends “to keep the petition up until the pay increase is rescinded [by the Village Board]. I also look forward to taking it offline and allowing people without computer access and email to sign as well — either door to door, or in a public place here in Cold Spring.”

Gallagher protested Monday night (May 21) that “the purpose of the petition is clearly political” and that it erroneously asserted the raise occurred without a chance for public input. The petition appears among assorted local-interest posts on a Facebook page for Free Speech Philipstown, though the petition itself falls under the hosting purview of a national group, Change.org, to which Bowman directed questions about signatures.

Questions indeed arose. On Monday one purported signer, Philipstown Supervisor Richard Shea, angrily alleged that someone had fraudulently used his name. “I never signed it and have no intention of signing it,” Shea informed Philipstown.info. “This is identity theft.” In a letter to Bowman, he demanded a retraction and said that “whoever added my name to the petition has done so maliciously and is causing damage to my reputation and defaming my character.” Bowman said May 23 that two names had been removed.

In a lengthy rebuttal to the petition, Gallagher stated -– among other things -– that the attempts to enhance mayoral pay began under his predecessor, Anthony Phillips. Thursday morning, the name “Anthony Phillips” appeared on the petition, with a comment: “I believe that if a person needs a salary of this proportion to be a part-time elected official, that person should get a real job. If one is incapable of their position, of course it takes longer. But why should I foot the bill for stupidity?” An attempt to reach Phillips to confirm his signature was unsuccessful.

Gallagher’s rebuttal claimed that Phillips’ real compensation was about $14,200 with the inclusion of unlimited free car gasoline from village tanks (a now-defunct courtesy) and reimbursements for personal-phone use which, he said, “New York Law does not allow.”

Gallagher also noted that the impetus for boosting mayoral pay began with former Trustee Gordon Robertson — a frequent Gallagher critic. In February 2009, acknowledging the long hours Phillips put in, Robertson proposed that the trustees give up half of their salaries to boost the mayor’s pay. The trustees – who then included Gallagher – made about $7,000 each, so Robertson’s proposal would have increased the mayoral salary to about $24,000. Although that did not happen, the idea of more pay for the mayor slowly took hold. In 2010, a year after becoming mayor, Gallagher recommended that the mayor’s pay be increased by $5,000 but that the raise not kick in until after the March 2011 mayoral election. Gallagher won the 2011 race and several weeks later the Village Board increased his pay by $2,500 for the 2011-12 fiscal year. The board then voted again this year, on April 24, to increase the pay by the remaining $2,500. The new village budget, including Gallagher’s salary (raise included), takes effect June 1. With the $2,500 raise, Gallagher’s total compensation package comes to $15,162, which consists of $11,621 in base salary; $1,041 for a committee chairmanship (the same amount trustees get for chairing key committees), and a $2,500 stipend as village budget officer. The 22 percent figure comes from combining Gallagher’s old base salary of $9,120 and $2,500 budget officer stipend and multiplying by 22/100.  Key village officials make more than the mayor. In 2012-13, the village clerk will earn $47,019, the accountant $54,630, the highway foreman $76,500, and the water-sewer superintendent $96,000.

Gallagher objected that the petition “states falsely that the Board of Trustees gave the mayor a 22 percent pay increase without allowing for public comment.” Although the board voted on the raise on April 24, the issue initially came up on April 17, at the Village Board public hearing on the new budget. At that session, Trustee Bruce Campbell suggested a mayoral pay hike, along with various other adjustments to the draft 2012-13 budget. In the subsequent public comment period that night, Bowman opposed the increase. “Elected officials shouldn’t be looking at raises when you’re going to raise health-care costs for employees,” he emphasized.

Gallagher said that “I would appreciate the two-thousand raise, but it’s not included in the budget. It could be added.” It was, a week later, as the board made last-minute changes before approving the budget.

The petition introduction juxtaposes the mayor’s salary against employee benefit burdens, stating that “this raise was granted literally right after the mayor had asked village employees to assume more of their health-benefit costs.” During Village Board budget-setting sessions, Gallagher said that employees would receive a small pay raise to help cushion an increase in their portion of health insurance. Under the new budget, employees will pay 5 percent of the insurance premium –- with taxpayers picking up the other 95 percent.

Bowman dismissed criticism of the petition and said Friday that while the number of supporters did not surprise him, elected officials’ reactions did, including “threats of defamation of character.” Such remarks “show that our elected officials don’t understand that they answer to the voters and taxpayers, and that it is our duty as citizens to hold them accountable for their actions,” he said.
Photo by L.S.Armstrong