Visitors to the Putnam History Museum (known until recently as the Putnam County Historical Society) in Cold Spring on Sunday afternoon were treated to a passionate and comprehensive lecture recounting Abraham Lincoln’s historic and somewhat covert visit to the Hudson Valley in June of 1862. Anthony J. Czarnecki, author of the soon-to-be-published article Mr. Lincoln’s Secret Visit to West Point, shared anecdotes and stories from his exhaustive research into this trip. In honor of the historical connection that Putnam County has with the former president, Czarnecki also presented the museum with a new, numbered print of a portrait of President Lincoln done by local artist Bohdan Osyczka who was a faculty member at the Parsons School of Design and a prominent resident of Peekskill.

In the historical accounts of his presidency, little attention is given to President Lincoln’s visit to West Point, a trip that took place in the midst of the Civil War when the outcome was still uncertain and the Union Army’s military strategy all but failing. Czarnecki, however, was curious to learn more about this fabled journey and his research led him to conclude that this three-day excursion up the Hudson River represented a turning point in President Lincoln’s personal and professional evolution. Six months after the Secret Visit to West Point the Emancipation Proclamation, the document abolishing human slavery and authorizing the enrollment of former black slaves into the army, was signed into law. 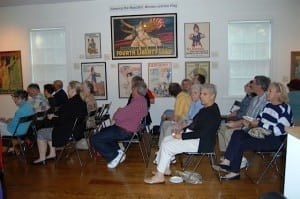 Full house for the lecture, at the PCHS museum

President Lincoln was a curious and somewhat restless Commander in Chief (in 1862 the New York Times stated that “the president is given to unannounced journeying”) and the type of leader who wanted to see things for himself. He was also no stranger to long and arduous train trips, having made several newsworthy journeys in previous years. Nonetheless, the journey to West Point was exceptional in that it took President Lincoln away from Washington for the longest duration of his presidency. This particular excursion was also carried out under the cover of night and inside a veil of secrecy; the public made aware of the trip only after Lincoln arrived back home.

The secret arrangements were made and carried out by a few ranking members of the military and by railroad executives who received a telegram ordering them to “prepare to receive a brother president.” The Secret Service had yet to be formed, so the president traveled with only two companions, Mr. Daniel McCallum, Superintendent of US Military Records and his personal valet, William H. Johnson.

At 4 p.m. on June 23, 1862, President Lincoln boarded a special train in Washington, DC with direct, non-stop service to New York City. The presidential train arrived at the 30th Street terminal in New York City at midnight, and there he switched to the Hudson Valley Railroad line for the northbound trip to Garrison’s Landing. At Garrison a ferry awaited Lincoln, who was accompanied by Samuel Sloan, president of the Hudson Valley Railroad Line, and Winfield Scott, General in Chief of the United States Army. Together they crossed the river to West Point in the early hours of morning and retired to the Cozzens Hotel for a few hours of sleep.

In the morning, President Lincoln was taken on a whirlwind tour of the region. He spent five hours in conversation with General Scott discussing military strategy and logistics as Lincoln was frustrated by the lack of military victory against the Confederacy and wanted to solicit independent advice on future planning for his troops. He then toured the military academy at West Point. He visited the chapel and horse barns and was honored with a grand salute.

Later that same day the President took a ferry back to the east side of the river so that he could tour the Foundry. The president observed the production process first hand and met Robert Parrott, Superintendent of the West Point Foundry and inventor of the cannon that was indispensable to the Union Army’s effort during the war. After tea and a visit to “Marshmoor,” Gouverneur Kemble’s estate, he retired back to the Cozzen’s Hotel for a nap before dinner. The following morning President Lincoln was ferried to Garrison’s Landing one last time for his trip home.

Czarnecki believes that the trip to West Point was a pivotal moment for President Lincoln and that his retreat to the Hudson Valley afforded him time away and respite from the politics of Washington in order to form a “fresh, new perspective, which he desperately needed.” Upon arrival back in Washington, President Lincoln’s self-confidence was strengthened and he was able to rethink his failing military strategy. Soon after the trip, dramatic tactical changes were made and the Civil War transitioned from a ‘limited’ war that was restricted to the battlefield to a ‘hard war’ that would now seize southern assets, mobilize slaves and destroy the infrastructure of the Confederacy. Lincoln called this stance: “A New Birth of Freedom.”

Lincoln also underwent a massive personal evolution in regard to his belief about slavery. As per Czarnecki: “[Lincoln’s visit to West Point] represented a dramatic turning point in the evolution of Lincoln’s thinking on the most divisive socially and political controversy in the 19th century. His views on human slavery in America had now evolved from colonization to compensation to emancipation.”

This evolution is illustrated in the sweeping changes to law and order that he made in the weeks following the trip to West Point. Six months after President Lincoln’s return from West Point he signed the Emancipation Proclamation at the White House abolishing human slavery in the states that were in rebellion against the Union. Furthermore, President Lincoln recognized that the military proclamation was temporary and, desiring a more permanent solution, proposed and lobbied for the adoption of the 13th Amendment to the Constitution that would ban human servitude in the United States.

Somewhere in a field at West Point there grows a Honey Pot tree, planted in honor of President Lincoln’s Secret Trip to West Point, a trip that brought Lincoln up the majestic Hudson, into the bowels of wartime armaments production, and quite possibly gave him the courage and the fortitude to end a bitter war and help form a more perfect union.

Anthony Czarnecki was the fifth speaker in the Putnam County Museum’s Bicentennial Series. On June 2, Dr. Trudie Grace will give a talk focusing on the Museum’s current exhibition: America the Beautiful: Women and the Flag.