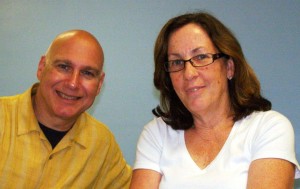 Art Labriola and Karen Bresnan share their expertise in music at the Garrison School.

The order of the day at the Garrison School flows with a rhythm of lively vigor, but the middle school jazz band amps up the energy a notch higher . . . even without their instruments. Put them in a room with their jazz band instructor, Art Labriola of Garrison, and the young musicians chatter about jazz improv, collaboration, and jam sessions. Turn them loose with pianos, saxophones, trombones and trumpets, and this group of middle school students creates great jazz.

The students recently gathered to celebrate a brilliant year of learning and playing, including a performance at the Garrison Children’s Education Fund Spring Thaw fundraising event held at the Garrison Institute in April, and culminating with the school’s May concert for band and chorus at the Garrison School. The jazz band, a middle school elective course made possible in part by the GCEF, offers students the opportunity for further enrichment in the school’s music program.

Karen Bresnan, the school’s music educator for the past 23 years, wanted to offer jazz in addition to band and chorus, and researched avenues to realize the possibility. “I initially wrote a grant to the Garrison Children’s Education Fund to start a jazz ensemble,” Bresnan said. “It’s an extension of band, and we’ve had a couple of people leading it over the past several years, and this is Art’s third ​year.”

Labriola, an accomplished composer and jazz pianist with a Grammy, Emmy and Clio among his credits, found his place within the school’s framework as a parent. “We’ve been here in Garrison for 16 years,” Labriola said. “I’ve got a daughter at Haldane and one graduating from the middle school this year. You get involved with your kids, and I’ve always tried to lend a hand on piano. The nice thing about Garrison is that we can fund programs where there would otherwise be no budget. It was a great year and we also had theory. A few of the kids wanted to get under the hood of music, and jazz charts are much harder than your standard fare.” 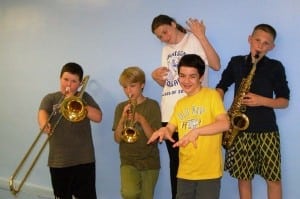 Sixth-grader Alex Mancuso credits the jazz band elective to helping him take giant steps in his musical ability. “I’ve been playing (trumpet) since fourth grade,” Mancuso said, “and I learned a lot this year. I’m playing with more flow, not as choppy, and I learned how to play out more.”

Garrison School parent and School Board vice-president Ray O’Rourke is ​pleased and proud of the jazz band endeavor and Labriola’s direction and inspiration. “The students come well prepared to the jazz band by the experience that they’ve received with thanks to Karen Bresnan who teaches music in our elementary and middle school,” O’Rourke said. “I’m very impressed with this year’s jazz band program, not just with the quality of the music but with the enthusiasm the kids showed at the concert and throughout the year. Their performance at the Spring Thaw sounded terrific, and there were people who were surprised that the jazz they were enjoying came from a middle school jazz band.”

Labriola notes that his musicians have nurtured their chemistry and talent together. “You kids are sure a good group, and you showed up every week and you played great,” Labriola told them during their celebration. “And what’s the most important thing about jazz band from a musical point of view?” he quizzed them as they capped off the year with an ice cream cake. “Soloing! . . . Improvisation!” the students shouted back.

Sixth-grader George Weed said Mr. Labriola turned a good year into a great year for him. “Mr. Labriola really encouraged me,” Weed said. “I went from being very shy about solos to getting out there and playing.” 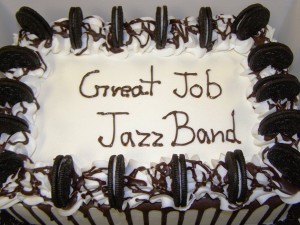 The Garrison Middle School Jazz Band celebrated a year of progress under the direction of Art Labriola.

Impromptu, as they’ve learned to navigate notes, the students let out a musical “Thank you, Mr. Labriola!” Sixth-grader Alex Sharpley shouted with praise, “He’s the most awesome teacher ever!” And the band members aren’t storing their instruments away for the summer. Most of them promised to continue their daily practice, not just because they’re crazy about jazz, but jazzed up about music and their teacher.
Photos by M.A.Ebner