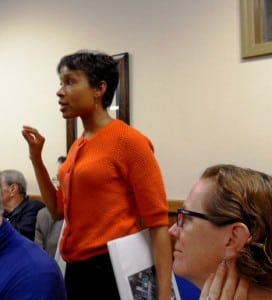 As the Cold Spring Village Board this week began reviving both the Butterfield redevelopment including hopes of relocating the post office there, local residents voiced allegations of secret negotiations to dump the post office onto a residential lot in their neighborhood instead. In March, the Cold Spring Planning Board proposed putting the post office, soon to lose its Foodtown Plaza lease, onto a vacant parcel known as Lot B, at the corner of Marion Avenue and Benedict Road. On Monday (May 21), Janice Hogan, president of the Benedict Road and Marion Avenue Neighborhood Association, sent Village Board members an e-mail informing them that residents “heard that the Village of Cold Spring has privately approached Constantine Serroukas to request that he build a post office on the R-1 [residential] lot,” which Serroukas owns. Still seeking an answer, Hogan raised the question again in person at the Tuesday (May 22) board meeting. Had village officials been secretly negotiating, she called out to Mayor Seth Gallagher, urging him to respond by saying “yes or no.”

“No, I don’t want to because I find it kind of a disrespectful question,” Gallagher replied, voice rising. He said the Village Board has been focused on the Butterfield situation and that, in addition, “there’s a danger we could lose the post office completely.”

Undeterred, Hogan, also sounding angry, assured the board that “I am sorry; I am not going to shut up on this.” She again pressed Gallagher to answer the question.

“I don’t want to,” he replied. “You simply cannot take over the meeting.”

Trustees Bruce Campbell, Charles Hustis, and Ralph Falloon likewise declined to answer, although Trustee Matt Francisco explained that he could not say anything because he did not know if anyone had talked to Serroukas.

After the meeting, Hogan disseminated a draft statement blasting the Village Board, especially the mayor, but later withdrew the comments in order to get feedback from her group. On Thursday, following consultations with her colleagues, she merely said the association members  “are committed to the expectation that the mayor and trustees will serve the village with respect, sensibility and transparency. We are holding ourselves to the same standard.​

Another neighborhood resident, Kevin Gaugler, said that “the whole group is concerned” about the stories circulating. He said he was unsure where they began. Overall, he added, “there’s certainly been frustration on the part of residents but I understand members of government have some of the same frustrations. I find in conclusion if both sides are frustrated, democracy is probably working.”

Gallagher said Wednesday (May 23) that “no, we have not” discussed constructing a post office on Lot B with Serroukas. Moreover, he added, while the parcel once was once eyed as a possible parking lot, “that thing has been taken off the table” as well. In any case, he said, “there’s no way we can rezone secretly.” He suggested that some of the neighborhood sentiment reflects “no real concern for the larger issues” facing the village, including potential loss of its post office Aug. 31. “I think energy would be​ better spent on that: How can we try to keep the post office?”