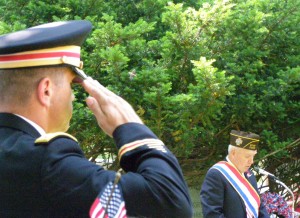 Philip Schatzle and his local organizing committee started putting plans in placefor the 2012 Memorial Day Parade and Services several months ago. And though the 77-year-old Philipstown native was honored to serve as Grand Marshal of this year’s parade,Schatzle and the parade committee had intended for someone else to wear the Grand Marshal sash. If plans had played out as printed on the Memorial Day Services program,local WWII veteran Father John G. Mills, who passed away May 15 at the age of 92,would have worn the Grand Marshal sash.

“I felt that I was representing Father Mills,” Schatzle said. “He was going to be the Grand Marshal and he was going to ride in a convertible in the parade. He was tickled pink.”

Schatzle completed the parade route, in honor of Father Mills and the many generations of service members who have fallen to defend America’s freedom, and processed with community members to the Memorial Day Services at the Cold SpringCemetery. The current Commander of Veterans of Foreign Wars Post #2362, Schatzleworked with a team of volunteers from the VFW and American Legion Post 275 to plan ​

Lt. Col. Kenneth W. McDonald, United States Army, currently serving at the U.S. Military Academy, West Point, delivered the Memorial Address. As community members gathered under a canopy of trees and sunny skies, McDonald asked for remembrance not just of the men and women who have served and died to defend freedom, but to remember wounded warriors. 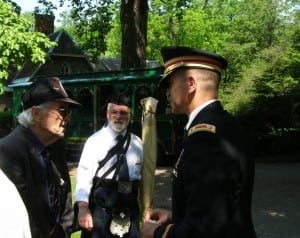 McDonald was wounded in Iraq, and sustained serious physical injuries as well as post-traumatic stress disorder. He has become an advocate for others who also suffer from PTSD, and encourages them to seek assistance.

“PTSD comes in a number of ways and for me it was building up and it was a constant stress level,” McDonald said. “I started having a number of challenges related to when we were in Iraq, going outside the wire, and when we were attacked. As a senior officer, I knew there was a stigma with PTSD, but I talk about it to junior officers and enlisted soldiers so that they will also seek help.”

Cold Spring’s Roger Keppel was moved by McDonald’s address as he rememberedhis comrades who did not return home from Vietnam. A Purple Heart recipient himself, Keppel served in Vietnam in 1969. “When ​

McDonald’s wife, Col. Deborah McDonald, was among the large gathering of community members in the solemn setting.

“This is small town America and that’s what it’s all about,” Deborah McDonald said. “What Kenny said in his speech is what we see here today, villages across America dedicating the lives of service.”

Cold Spring resident John Maasik, attending with sons, Evan and Alek, both Cub Scouts, said that part of the citizenship of Scouting is learning what soldiers do for America. “It’s been a day to remember those who have served this country,” Maasik said, “and given their all for our freedom.” 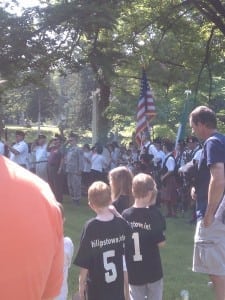 McDonald’s address centered on a theme of freedom, with emphasis on the meaning of Memorial Day and its origins.

“One of the highlights of the address for me,” VFW Commander Schatzlesaid, “was the focus on the proclamation in 1868 to establish Memorial Day.” Schatzleand the community’s league of VFW and American Legion members carry out the proclamation to honor Americans who have given their lives.

“Combining the VFW and American Legion efforts is a very positive part of the community,” McDonald agreed. “I think they serve a number of purposes, and one is the remembrance piece.”