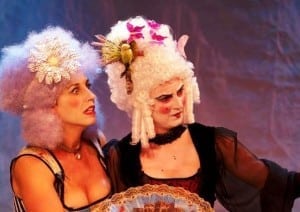 Lisa Sabin (L) and Jessica Frey as Foible and Wishforit

The World’s End Theatre production of Congreve’s Way Of The World has announced a two-week extension of its run at the Depot Theatre.  Additional performances of the Restoration romp have been added on Fridays and Saturdays June 1, 2, 8 and 9 at 8 p.m., Sunday June 3 at 4 p.m., followed by a talkback, and, on June 10, a special gala picnic on Garrison’s Landing with the cast and director John Christian Plummer beginning at 4:30 p.m. followed by a 6:30 p.m. performance with champagne at the conclusion.