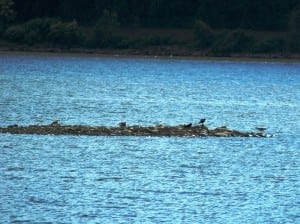 Despite its sweet name, Cupcake Island lurks as a threat to river-farers. Frequently submerged, it lies off the Cold Spring shoreline, unseen and dangerous, an apparent vestige of 19th-century West Point Foundry inventiveness snagging 21st-century boats. Visible at low tide, Cupcake Island is reportedly the remains of part of the foundry dock, which once jutted far into the Hudson. On May 19, Cupcake Island did its dastardly deed again, snaring the propeller of the Bottom Line, a 20-foot vessel from Haverstraw Marina, about 15 miles downriver from Cold Spring. Carrying a party of four, the hapless boat seemed to be in a real predicament.

Help was at hand, though, thanks to several intrepid sailors. As its skipper, Fred Warshaw, a retired certified public accountant, explained in a letter to the Cold Spring Village Board, the Bottom Line “met a submerged rock born in deep water near the Cold Spring marina. Then my luck changed because Commodore Mark Patinella, T.J. Russell, Roger Chirico [Jr.] and Ed Trimble appeared on the dock with Dave Levi of the Coast Guard Auxiliary.” Patinella heads the Cold Spring Boat Club, to which Russell, Chirico, and Trimble belong.

Warshaw told Philipstown.info May 30 that his boat managed to limp to the Boat Club dock. There, as his letter recounted, the Boat Club members “helped my wife, physically handicapped cousin, and his wife to disembark and directed them to relax under a tent while they would see to the boat. After conveying great concern about my navigating `as is,’ Patinella became the lead member of the team as he stretched out from the dock to remove and replace the ‘prop.’” Warshaw added that the Boat Club members “accomplished the task with good humor and made these four senior citizens thankful that there still are places like Cold Spring where hospitality seems to be prevalent, as exhibited at your waterfront.”

Like many others over the years, “they got grounded on Cupcake Island,” Mayor Seth Gallagher said at the Village Board’s workshop Tuesday night (May 29). 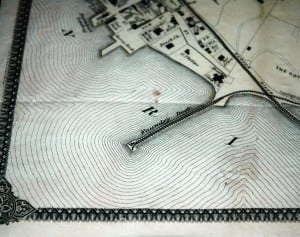 “Something should be done. It happens every year, to quite a few,” said Trustee Bruce Campbell, a Boat Club member, who read Warshaw’s letter aloud.  “I don’t know how many boats are damaged. It’s amazing watching it happen, or almost happen. I don’t know what it takes” to get warnings posted, he added.

An audience member who also belongs to the Boat Club, former Trustee Gordon Robertson, said he believes the U.S. Coast Guard was supposed to be putting out buoys to warn river traffic of the peril. While he noted that “it’s not the village’s responsibility” he suggested that perhaps the village could install its own signs meanwhile. With the summer river season beginning, the issue seems likely to resurface – even if Cupcake Island does not and from its hidden depths wreaks havoc on yet another unsuspecting boat.

Robertson said that the “island” was the terminus of the railroad that connected the foundry buildings to the waterfront. As a map from around 1867 reveals, the tracks ran the length of the dock and ended in an L-shaped platform, allowing the foundry to load products onto moored ships. Robertson said that the foundry also used the terminus for test-firing cannons – suggesting that the later “cupcake” was a fairly substantial creation. “It’s like rubble stone and it goes the whole length” of the old dock, Robertson said.  And how did the forgotten structure become known as Cupcake Island? That’s a mystery that the Village Board did not solve.
Photos by L.S.Armstrong