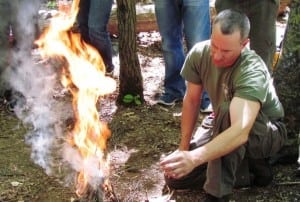 We’ve all wondered about it for at least a few minutes. How would we handle being thrust into in a real-life situation as portrayed in such movies as Castaway or The Road  or Alive. Would we survive?  21st century life does little to prepare us for such a possibility and yet serious things happen and not just in the movies. September 11th. The Tsunami. Hurricane Katrina. The blizzard of 1993.

How would we cope without supermarkets, bottled water, electricity, barbecue grills and a secure roof over our heads? Not to mention our iPhone. And what if it was for an extended period of time?

Mountain Scout Survival School teaches people how to survive in wilderness or urban settings – using little more than their senses, basic implements, fundamental knowledge and vital skills that date back centuries. The school, headed up by Shane Hobel, teaches these skills in two settings – New York City’s Central Park – and in Garrison.

On Sat. May 19 a group of about 18 people gathered in a privately owned woodland in Garrison to experience Wilderness Survival 1 – the foundation upon which Scout Mountain builds a series of progressively more detailed programs. The course was only eight hours long but it exposed participants to the fundamentals of survival: building shelter, finding water and food, building a fire, tracking, awareness and movement. 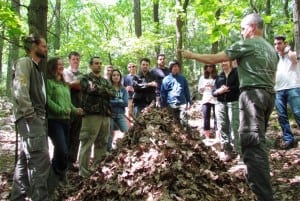 Hobel is a commanding presence as he teaches. He is direct and assertive without being pushy. He enunciates in a manner that would be the envy of any English teacher. He is beyond confident. Participants, standing in a semi-circle around him, immediately sense that he knows exactly what he is talking about.  Humor and his own experiences are intermingled with a deluge of relevant facts.

“How to build a fire” is no power point presentation.  Hobel uses a stringed bow fashioned from a piece of Little Stony Point driftwood, a pointed wooden peg, a block of wood with notch and depression cut in it, and a bit of soap, deftly using friction to quickly create smoke and then a red hot coal. In less than five minutes he creates a blazing fire. He does not have to tell anyone to pay attention. All eyes are on him – and the fire they hope to be able to build some day.

Hobel, a former Cold Spring resident, now lives in Beacon. He has had a wealth of experiences in his working life. Once while working as a stunt man, he jumped off the roof of The Hudson House in a ball of fire as part of an historic reenactment. After spending 20 years teaching outdoor education, he established Scout Mountain Survival School in 2008.

While discussing tracking he told of being hired by New York State Department of Environmental Conservation to track down a moose that inexplicably showed up in Dutchess County a few years ago. He found it in less than a day. He also recalled tracking two black panthers that had been released in Rockland County.

So when he tells the participants of Wilderness Survival 1 that a debris shelter should only be tall enough to allow a person to sit up – in order to conserve body heat – no one doubts his word. He’s tracked a black panther.

It’s all about awareness

After the shelter discussion Hobel surprises participants by telling them they are being watched – and have been all morning. “Can you sense it?” he asks. Several say they can. He asks the group to point to where they think the unannounced observers are. Several people get it right. From off of the forest floor, two volunteers stand up, covered in camouflage and leaves. One was within spitting distance of the group. “It’s all about awareness” he said. Later he even surprises his two volunteer observers when a third “scout” is discovered by one of the participants.

His back pack and survival kit carry an array of everyday but very useful items. He is not averse to using modern devices, but he points out the Bic lighter he carries will eventually die – whereas knowledge, vital skills and simple implements will not. He routinely carries several garbage bags for gathering water and keeping wood dry; a signal mirror; a good quality knife capable of carving wood, empty Poland Spring water bottles which when empty roll up like a toothpaste roll for easy storage – and always several cloth bandanas.

The bandanas are used along with a simple wooden tripod to create a water filtration system. The bandanas are suspended on the tripod, hanging one atop the other. The top bandana is filled with grasses, the middle with sand or clay and the third with charcoal – obtained from a fire. Water is poured into the top bandana and goes through the three makeshift filters.

The May 19 participants came from around the region – from Long Island to Rosendale. Debbie, who lives near Newburgh, signed on initially because a friend told her she’d meet great people. “But I also don’t want to be quite so dependent on society.  It’s crumbling a bit I think. I want to know about more about nature,” she said.

Caitlin from Rosendale echoed that sentiment. “I have a basic love for the outdoors but I feel timid. I want to gain confidence,” she said.

Erick from New York City had his girlfriend to thank. “She signed me up for my birthday, because she knows I’m very interested in learning about fundamental skills.”

Hobel sees people sign up for a variety of reasons. “I see weekend warriors and people who want to learn more about themselves. And I see people who are genuinely concerned about things like terrorism and want to be able to take care of their family and friends.” He recoils at being called a “doomsdayer.” To him it is about having the skills to handle any number of situations. “Stuff happens,” he said. Additional advanced courses in survival, fire, tracking, camouflage, movement and edible plants are also available.
Photos by M.Turton