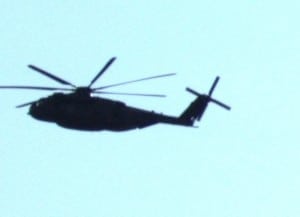 Philipstown residents can expect to hear the sounds of military training coming from nearby training facilities during June, July and August. A press release from the U.S. Military Academy at West Point indicated that cadet training will take place at  Camp Buckner and Lake Frederick on the west side of the Hudson River and at Camp Smith in Peekskill, beginning in early June.

“Sporadic noise levels” can be expected through mid-August with increased activity during specialized training operations from June 28 through July 19.  Residents can also expect to see and hear low-flying jet aircraft and attack helicopters on June 5 and 6, from 3:30 to 5:30 p.m. in and around the training areas as part of the training. Such training is conducted to simulate the physical and mental challenges cadets will face when they become officers in the U.S. Army.
Photo by M.Turton