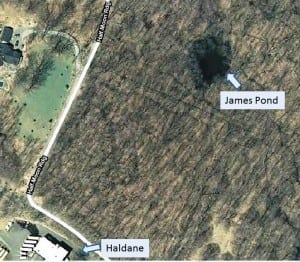 The Haldane Board of Education plowed through a myriad of business items during a three-hour meeting on June 5. Trustees dealt with everything from news of major long-term budget savings and appointment of coaches for 2012-13 to rejection of bids for improvements to the baseball fields on Route 9D, hints as to who the next board president will be, and discussions over the possible sale of a property owned by the school district.

The only contentious item of the evening centered on the possible sale of 10 acres of land around James Pond. The 10.6-acre property has been appraised at a value of $425,000, funds which trustees and administration are considering putting towards a $2 million project to improve the main sports field on the Haldane campus. Due to the New York State budget cap the project cannot result in any tax increase to residents. “James Pond is a key item,” Superintendent Mark Villanti said. “What is the least you’re going to accept?” he asked trustees – referring to the sale price of the property. “Without knowing that, I can’t put a budget together [for the field improvement project]. If you say ‘no’ [to the sale of the property] then we have to look at the project another way.” As currently envisioned, the project would include installation of artificial turf, facilitating much more extensive use of the field for programs such as physical education. While trustees have not come out with a formal recommendation to sell the property, discussions have been leaning in that direction. Board members have been cautious but there has with no vocal opposition to the idea.

Trustee Evan Schwartz may now be wavering however. “It’s an awkward situation,” he said, stating that if the school district were to propose developing the James Pond property it would likely face law suits from neighbors, but that if those same neighbors were to purchase the property, they could “quadruple” their investment. “I don’t want to be the guy who stops the sale and stops the field project,” he said. When he commented that, “I don’t feel I have enough information to make an informed decision,” his fellow trustees were clearly frustrated. President Joe Curto indicated that all related information has been available for some time and suggested that Schwartz reread the appraisal of the property.  He also said restrictions placed on the sale would still give Haldane access to the property for educational uses  and that due to the nature of the property any development would be minimal. “If you want to keep a zero percent increase in taxes you need the land sale. Or, you need to find funds from other sources,” Curto said. Trustee Peter Henderson said he supports the land sale in principle but that he wants to hear from residents. “I’ve heard very little from the community,” he said. Henderson said that in order to understand the limitations of the property he has walked the entire site and he asked Schwartz if he has done the same. ​Schwartz said he has not. Curto suggested that trustees delay any decision on the property until the first meeting in July when the new board will be in place. Curto will no longer be a board member then, but said, “I’ll still comment all I want.”

Curto ends his tenure as trustee and school board president at the end of June and will be honored at the board’s June 19 meeting. He stepped aside as chair of the June 5 meeting and asked vice president Gillian Thorpe to deal with the agenda. Later in the meeting Thorpe indicated that trustee Michael Junjulas, who was not in attendance due to an out of town commitment, has expressed interest in replacing Curto as president for 2012-13. Thorpe said she would like to stay on as vice president. Jon Champlin, who was elected trustee in May, sat at the table with board members and participated in discussions but did not vote. He begins his term on July 1.

Villanti reported that the school district took advantage of declining interest rates and its positive bond rating to refinance the debt it incurred in completing major capital improvements in recent years. Villanti said the District was able to lower its interest rate from 4.5 to 2.5 percent resulting in a savings of $51,900 next year alone. Over the term of the bond, which has 19 years remaining, savings in interest paid will total $1,033,000. Roof repairs were a major part of the capital works.

Wayne Robinson, Haldane’s director of facilities, who has overseen numerous such capital improvements, is retiring this summer and the search for his replacement is in full swing. “Wayne is going to be very difficult to replace,” Villanti said. Three candidates are currently being considered.

The upgrading of the baseball fields located along Route 9D is going to have to wait a bit. Trustees accepted Villanti’s recommendation to reject bids received from five companies because they were too high. Landscape Unlimited, Fourmen Construction, Sport-tech Construction, Bradhurst Site Construction and Yonkers Excavating submitted bids that ranged between $281,130 and $497,000. “I’m disappointed they came in above budget,” Villanti said. “We’ll modify the specs and re-bid.” He said he is “more optimistic” that the next round of bids will be successful after having spoken recently with local contractors. Many sports were on the minds of trustees as they approved 25 coaching positions for 2012-13. Coaches were approved for football, soccer, volleyball, cross country, tennis, weight training, basketball, track, baseball, lacrosse and golf. Stipends paid to head coaches range from $3,059 for soccer to $4,869 for football and boys’ and girls’ basketball. Coaches for modified teams, junior varsity teams and assistant coaches are paid stipends that range from $1,852 for modified volleyball to $4,351 for boys and girls junior varsity basketball. In addition, more than 50 co-curricular positions were approved for next year including a wide range of duties — from department heads, band leaders and senior class advisor to proctors, tutors and stage crew. Stipends range from $897 for middle school team leaders to $3,439 for dramatics. Tutors are paid at a rate of $54.66 per hour.

The Haldane School Foundation has a proven track record of providing financial support to Haldane activities but Villanti singled out their latest donation as being above and beyond — 2012 Spring Innovation grants totaling $22,935. “In this economy, that is remarkable,” he said.