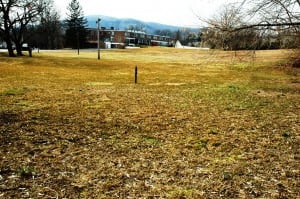 Gallagher describes it as amorphous, in need of focus

The shift from a once very public consideration of the Butterfield development to a more opaque yet-to-be defined process was on a brief display last Tuesday (June 5) at the regular monthly meeting of the Cold Spring Planning Board.

Held in the claustrophobic confines of the Village Hall committee room, Butterfield was not on the meeting’s agenda.  Since the Butterfield developer, Paul Guillaro, officially withdrew his application for special zoning for the site, the Planning Board does not have a formal role in reviewing plans. In fact little but the prosaic approval of past meetings’ minutes was scheduled along with the opportunity for open public comment, of which only a few citizens availed themselves.

An impromptu visit from Mayor Seth Gallagher and Trustee Matt Francisco, however, demonstrated that while officially off the agenda of any public meetings, Butterfield is still on the local government’s front burner. Gallagher was invited in from the hallway by Joseph Barbaro, Planning Board chair, to help define what the mayor and village trustees now wanted the planning board to do on the Butterfield issue.

Gallagher told the Planning Board to write up a report of their observations, decisions and concerns about Butterfield and forward it to the trustees.  “Say anything you want to say,” he said.

“You guys know what the concerns are and we’d love to hear what they are,” said Francisco to a board that has already publicly raised several concerns in the first six months of this year.  It was the board’s 3-2 vote against market-rate senior housing for the site that apparently caused Guillaro to withdraw his application.

The Planning Board has also questioned the tax consequences of the development, the traffic impact of having more than 250 parking spaces on the site, the height of the buildings and the need for preserving open space, among other issues.

It was also the Planning Board that called for organized public input (a charrette) early in the review process. Gallagher told the board to include some comments from that meeting as well.

The mayor described the current state of the Butterfield project as ​“fairly amorphous, we’re hoping to make it more focused and get it moving.  He did not say what that actually meant in terms of a process, particularly one the public could observe. In a relatively brief exchange, Planning Board members Arne Saari and Richard Weissbrod tried to engage the mayor on the issues of traffic and parking and market-rate senior housing.

Saari questioned whether the plans to have government offices clustered in a municipal building could accommodate the parking needs of various services including the police, post office, courts, county, town and village offices as well as a senior citizens center. “Basically you have a building everybody is going to drive to,” said Saari, who asked Gallagher if the Planning Board could confer with its consulting engineer in developing their view of the parking and resulting traffic issues.

Gallagher acknowledged a traffic study would eventually be needed but said he thought it premature given that the location of any planned buildings for the site had not been decided.

Weissbrod brought up the market-rate housing issue in the context of the tax impact which he said involved having full property taxpayers cross-subsidizing proposed condo residents who would pay a lesser tax rate under state law.  He also stressed that the village’s comprehensive plan called for housing to be tax-positive and he questioned whether the senior housing met that test

Earlier in the meeting members of the public underscored some of the concerns underlying any consideration of the Butterfield outcome. Joseph Immorlica, a former Planning Board member, presented the board with a report emphasizing the ageing demographic changes in America and with it the demand for more senior housing.

Judith Rose, a professional consultant on affordable housing projects, warned the Planning Board that affordable housing was a dicey proposition from a financial perspective. She said nearly every project in New York State and beyond, with which she is involved, is struggling to make its tax and financing commitments due to, among other factors, increased costs for insurance and utilities.

​She said further that developers typically cut a deal with local governments for a payment in lieu of taxes for a set period such as 10 years.  But after that period expires “then all hell breaks loose,” she said.

Aaron Freimark, who operates the Facebook page, Better Butterfield, raised the question of the availability of documents relating to Butterfield that ought to be in the public domain.  He asked the board to find a way to post correspondence on the topic on the village website, which Barbaro said he would take up with the village clerk.