Shea tells Town Board of progress

Sen. Charles Schumer Friday (June8) endorsed the idea of a “Hudson River Fjord Trail” linking Cold Spring to Beacon, a project that also drew town, county and state officials to a brain-storming session with environmental groups on Thursday in Poughkeepsie. During a speech to the Hudson Valley Economic Development Corp., meeting at a resort near New Paltz, Schumer, a New York Democrat, referred to the proposed fjord trail and urged state and federal governments to push ahead on it. “We’re proposing it today,” Schumer said, in remarks quoted by the Poughkeepsie Journal newspaper. Other regional media noted that he focused on the safety, tourism, and scenic benefits the trail would bring, pointing to the success of the Walkway over the Hudson crossing the river at Poughkeepsie via an old railroad bridge. 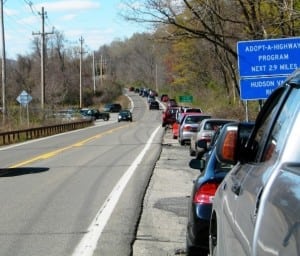 As envisioned thus far by a coalition of governmental and private organizations, the trail would stretch along the Hudson at least from Cold Spring to Beacon and perhaps further south as well. The project has won the enthusiastic backing of Philipstown Supervisor Richard Shea, who has regularly updated the Town Board about progress and delivered another report on Thursday night, following that day’s intergovernmental-inter-organizational trail discussions, whose attendees included a high-level regional member of Schumer’s staff. “It seems that this thing is going to move along. There are resources being committed,” Shea said. “There were some pretty exciting discussions regarding the availability of some funds and things. It was a productive day,” involving “definitely a higher-level discussion. We were at the DOT headquarters and that says something” about DOT’s growing participation. “And also to have Sen. Schumer’s interest…” The following day, Schumer picked up the trail theme in his Hudson economic development address.

On Thursday night, Shea said that the first piece of the trail is expected to run between Cold Spring and Breakneck Ridge. “There are a lot of ideas out there to get people off the road and off the tracks and onto a walking path,” he said. Currently, on many weekends the road is clogged with pedestrians walking along the shoulder from Cold Spring to Little Stony Point and beyond to the Breakneck trailhead, dodging vehicles zooming by on the road as well as cars turning onto wider areas along the shoulder to park. Shea said the DOT staff zeroed in on the need to improve the parking situation. “Parking is so informal now, it’s a disaster. The whole corridor is a disaster,” he said. To help mitigate the mess, the DOT members suggested “more formalized parking areas” at Breakneck and on the east side of the road at Little Stony Point, Shea said.

So far, he told the Town Board, well-drafted but preliminary designs exist for the trail. “The next step is to try to define that plan a little bit more,” he explained. “Nothing is carved in stone yet; it’s all feasibility and conceptual.” At least as foreseen at this juncture, the trail would run between the roadbed and the railroad tracks, he added. “It would probably wind up as part of Hudson Highlands State Park but be on the Metro North right-of-way.”