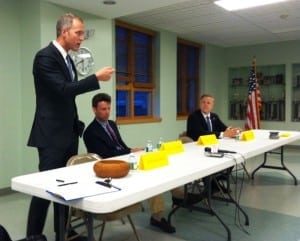 Local Democrats jammed the North Highlands Firehouse meeting room last Monday (June 11) to hear three of the five candidates for the Democratic party nomination to oppose Rep. Nan Hayworth for the new 18th district congressional seat.  Matt Alexander, Dr. Richard Becker and Sean Patrick Maloney made spirited cases against the incumbent and tried hard to distinguish themselves while remaining supportive and respectful of their opponents.  The primary election is June 26.

For approximately 75 minutes all three candidates hammered Hayworth for her votes in Congress, her affiliation with the Tea Party and what they described as her protection of special moneyed interests in Congress as opposed to the interests of the over-burdened middle class. They also expressed reasons why they would be the more effective candidate and congressional representative.

Two other candidates, Duane Jackson and Tom Wilson were no-shows after having committed to appear according to officials of the Philipstown Democratic Committee, which sponsored the event.  Well over a hundred people sat on metal folding chairs and listened to opening statements and answers to several questions from moderator Neal Zuckerman.

All three candidates drew enthusiastic applause from an audience eager to hear criticism of Hayworth and Republicans in Congress.  From the Democratic committee’s perspective, however, it was Sean Maloney who most impressed. The group, meeting in private after the forum, gave him their endorsement after what was described by a participant as a lengthy debate but clear support for Maloney.

Maloney, a new Philipstown homeowner, proffered his experience working in senior positions for President Bill Clinton and Governors Spitzer and Patterson, his fundraising ability, strong union support and involvement in numerous political campaigns as reasons to support his candidacy. He said President Clinton had endorsed him that very day.  Maloney has also gathered support from state and national party officials who have a keen interest in a race that appears winnable for a Democrat.

Still the other two candidates had supporters in the room and it is important to bear in mind Philipstown is a small part of a geographically large district encompassing all of Putnam and Orange Counties as well as chunks of Dutchess and Westchester.

Becker, a cardiologist and councilman in the Town of Cortlandt, said he relished the prospect of a doctor against doctor race against Hayworth, an ophthalmologist. He emphasized a commitment to broad healthcare coverage, including support for Medicare and Medicaid and the controversial Affordable Care Act, now before the Supreme Court.  Becker wasn’t shy about asserting that the national medical community would likely put significant funds behind his candidacy because they largely support  his views on the healthcare system, which track with the Obama administration.

The New York Times boosted Becker’s chances in the race with an editorial endorsement on June 15. The paper’s editorial board said Becker had “a record of service,” while they found Maloney has “good ideas” but chastised him for his performance during an investigation of state trooper behavior while serving in former Gov. Spitzer’s office. In a crowded Democratic primary race, especially one held in June for the first time in many years, the Times endorsement could hold considerable sway with voters looking for guidance. 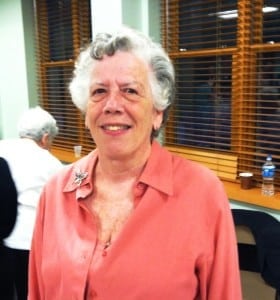 Alexander, the mayor of Wappinger Falls and an accountant professionally, is well known to local activists and gets high marks for his knowledge of the needs of the area, his effectiveness as a local government official and his oft-stated commitment to poorer citizens. “She [Hayworth] doesn’t believe government should be involved in helping people but I believe government has a role,” he said to applause.

Self-styled “Mayor Matt” is especially proud of his successful effort to build a water treatment plant for his village after, according to him, Rep. Hayworth spurned his request for federal assistance.  Alexander claimed Hayworth said she would only support funding for “interstate highways and defense.”

All three candidates expressed support for increased government expenditures particularly for national infrastructure projects to create jobs and further stimulate the moribund economy. They also agreed that a return to Clinton era tax rates would help relieve national indebtedness by raising revenue through shifting the income tax burden more to the wealthiest Americans.

The Indian Point nuclear plant, which is located in Buchanan, within the current 19th district, would not receive re-licensing support if any of these three became the congressman. They all urged its closing on safety and environmental grounds. Instead they prefer additional tax credits for alternative sources of energy such as solar and wind. And they would end tax breaks for oil companies.

Becker said he would be the best candidate to represent Democrats because he would take the fight directly to Hayworth. “You can’t be gentle with her,” he said as he listed various protests he has led against her over the last year, including the most recent over her aide’s offensive remarks about Democratic women. 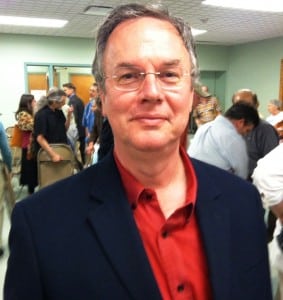 Alexander, who several times referred to arguments with his Republican father as training for the debate with Hayworth, said he would seek put the contrast of his positions with Hayworth’s at the center of his campaign strategy. He said his fundraising was strong but from small donations and he eschewed the necessity of bringing in big money from outside the district.  “We can change the game,” he said.

Maloney on the other hand trumpeted that he had raised more money than Hayworth in the first quarter of the year. “No one else has the support I have,” he declared, as he listed the AFL-CIO and the teachers, hospital workers, electricians and carpenters unions among other unions and political organizations.  “I have worked on campaigns all my life, when we all come together, we win,” he said.