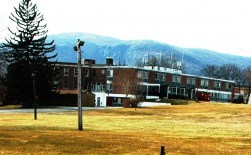 Accelerating the push to save the post office and simultaneously revive the Butterfield project, Cold Spring’s Village Board Tuesday (June 12) proposed a zoning amendment to allow all levels of government as well as mixed-use buildings on the old hospital site. The board -– mayor and four trustees -– sent the draft code change to the village’s Planning Board for review and comment within 30 days. Currently, B4 zoning only permits Cold Spring government facilities on the Butterfield site, prohibiting offices of the Town of Philipstown, Putnam County, New York State, and U.S. federal government. Under the proposed change, the B4 zoning would expand to allow “municipal and other government uses, including privately-owned facilities leased to a municipal or government entity, such as a United States post office.” It would also allow “mixed uses, consisting of two or more uses permitted or specially permitted” -– legal upon granting of a special permit -– “in the district.”

Last December, the former hospital property’s owner, Butterfield Realty LLC, proposed a more sweeping zoning change to create a “planned unit development,” or PUD, consisting of affordable senior housing apartments for modest-income elderly; more upscale condominiums for retirement-age residents; an intergovernmental building to house village, Town of Philipstown, and Putnam County offices; and retail/commercial quarters, with room for the post office. However, Butterfield Realty’s Paul Guillaro in May withdrew his application for the PUD zoning, citing frustrations with the process after yet another night of wrangling with the Planning Board.

As the ultimate authority, the Village Board has also been working on aspects of the project, including zoning considerations and solicitation of citizen input. Expanding the B4 zoning definition could give both Guillaro and the post office a new option, if one different from Butterfield Realty’s original intent.

The Village Board “has been considering for a while what to do about the post office” while also being heavily involved in the Butterfield development, both of which provided the impetus behind the B4 revision, said Village Attorney Stephen Gaba. “It’s a very simple, generic zoning amendment,” one that still gives the village control through approval of site-plans (architectural designs), Gaba explained. “I don’t think it’s a very controversial change.”  The U.S. Postal Service lease at the Foodtown plaza, across Chestnut Street from the Butterfield property, runs out on Aug. 31. Efforts to place it elsewhere in the Foodtown shopping mall foundered over neighbors’ opposition and questions about the proposed alignment, which put the new USPS close to Benedict Avenue on the plaza’s south end.

The B4 revision “is obviously one of the last great hopes for a home for the post office,” Trustee Matt Francisco said. He welcomed the power still afforded the village through the approval requirements. “We need that protection,” Francisco said.

As presently written, the B4 zoning, for a “designated medical and health-care facility ​district,” allows a hospital, sanatorium, nursing home and health-related facility, and medical center, and, by special permit, senior citizen housing – not restricted to those of modest incomes. B4 also allows inclusion of any use permitted in the R-1 (single-family residence) district: homes, churches and parish houses, schools, libraries, local municipal buildings, public parks, and playgrounds.

Gaba reminded the board that introduction of the B4 amendment “is just the first step in the process,” which could take three months to complete, given the anticipated report from the Planning Board, potential feedback from the Putnam County planning office, inclusion of any resulting changes to the draft text, and holding of a public hearing. “This is something we’d talked about [before]. We just didn’t have language on it,” Gallagher added.

Also at the meeting, the board’s formal monthly session, Trustee Hustis proposed that the Village Board update the entire zoning code and bring it into line with the Comprehensive Plan. The code “frankly, I think, is archaic and obsolete,” Hustis said. Advising the board to focus on the items deemed most crucial, Gaba pointed out that “it’s not going to be an overnight process” to fix the code.

Gallagher proposed that each Village Board member scrutinize the code and Comprehensive Plan and “maybe get the 10 priorities of the board … and then move ahead on those. I think there are some things we could probably tackle right away.”

In other business, the mayor announced that the Cold Spring Police Department has a member qualified to serve as a bicycle-patrol officer – a job that requires specialized training – and that bicycle patrols would start soon.  “I think that’s positive for the village,” said Gallagher, known for his own reliance on a bike to get around Cold Spring (at least before he suffered a concussion in a recent accident).

Building Inspector Bill Bujarski, who has assumed the duties of the assistant inspector as well, announced longer hours on the job, to better meet its demands and accommodate local citizens. He said his office hours are now from 9 a.m. to 4 p.m. on Wednesdays, and on Monday afternoons and mid-day Fridays by appointment to let him meet with residents and take up projects systematically. “We’re there to help,” he said.

One thought on “Village Board Drafts Butterfield Rezoning Law”