Vietnam, in all of its contradictions

Editor’s Note: Philipstown artists Susan English and Sheilah Rechtschaffer are featured as two-thirds of a three-person exhibition at the Skylight Gallery in Chelsea. Curator and artist Jennifer Mankiewicz visited the exhibition and discusses Rechtschaffer’s work in this essay; her thoughts on English’s work are in a separate story.

The color green usually brings to mind growth, abundance, the environment.  Conversely, green may make one think of decay, sickness, even death. The green of Sheilah Rechtschaffer’s work make us think “landscape” but for her, they are memories of a place, Vietnam, in all of its contradictions.

Sheilah first visited Vietnam in 2003, with her husband Bert, a retired dentist. They were immediately captivated by the land and by the people. Returning home, Bert sought an NGO that would allow them both to return as volunteers – Bert offering his services as a dentist, and Sheilah teaching art to children. Under the auspices of the East Meets West Foundation, they returned the next year and every winter for the following 5 years. 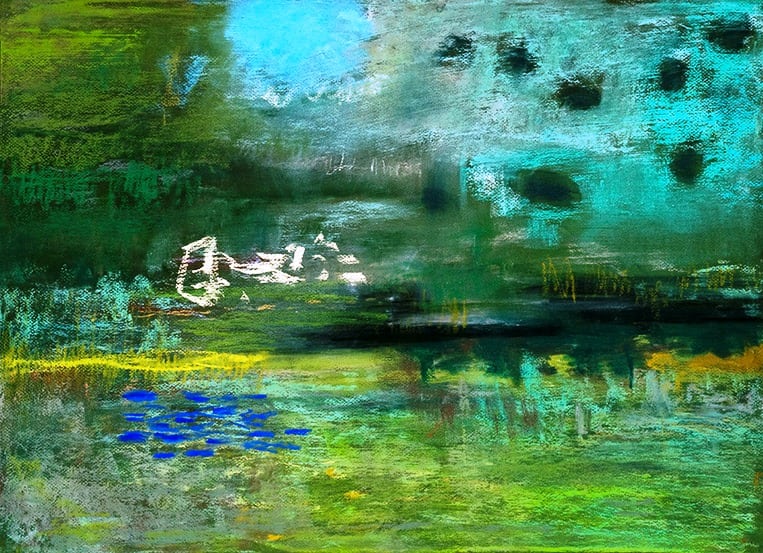 But Vietnam had long been in Sheilah’s consciousness. As a staunch pacifist, Sheilah actively protested the Vietnam War in the 1960s. She is keenly aware of the devastation the war brought to the country. Historically, Vietnam is an agrarian culture. As Sheilah puts it, “the rice basket of the world.”

The low-lying plains like the Mekong Delta are perfect for wet rice cultivation. Herbicides the U.S. employed during the war destroyed much of these lands and forced peasants to flee to U.S. occupied cities. Saigon became rife with slums and poverty was rampant. The rice fields, essential to their lives and economy, were poisoned with toxins.

Green also symbolizes regeneration. It is interesting that Sheilah creates a ground for the pastels by wiping out a drawing. On top of the destruction, a new drawing emerges. Greens are richly varied, from acidic yellows to summer’s green to deep, dark teals. In their abstraction, the layers of color, one can sense the lush vegetation as well as the oppressive humidity.

There is no actual horizon or depth of field in these “landscapes” – color hits the viewer full on. Through the density, patches of orange and blue and swaths of red appear, bits of bright yellow flicker. The metaphor is difficult to resist. It’s not a Phoenix rising out of the ashes but a prolonged healing.

Pastel is the perfect medium here, and one at which Sheilah excels. There is a directness and immediacy that is singular to pastels. Essentially, it’s pure pigment applied to a surface. The colors are luminous and pure. Newer works have marks that float over the surface, a calligraphy of sorts. Another layer. Not captions so much as they are poems in a foreign language.

The titles of the drawings themselves are poetic, “Perfume River Song”, “Shimmering”, “Lunar Moon”. The characters are not literal, but suggestions of the tonal Vietnamese language. I ask about “Om”, where the marks first appeared. She’s not sure where they came from: “Perhaps it was a laborer working in the rice field”

Sheilah reminisces about the time she spent in Vietnam, of the land, her memory of color. Of her friends, the travails of gentle, hard working people with unending optimism. These works are reflections of the warmth, love, and happiness she experienced. The Rechtschaffers last visited Vietnam in 2010, as visitors, not volunteers.

Today, Vietnam’s economy is surging. Equitable economic policies are helping to pull the Vietnamese out of poverty. Between 2000 and 2005, they had one of the world’s fastest growing economies, a growth that remained strong even as the global recession hit.  The forecasts are glowing. This is the green of healing, the color of hope.

From Skylight Gallery’s press release: “Vistas is a panoramic view of artists Colin Barclay, Susan English and Sheilah Rechtschaffer and their differing approach to the emotional impact of nature on the human mind.”

The exhibition opened on May 14 and runs through June 23. Skylight Gallery is located at 538 West 29th St., New York City. For more information, including hours, visit the gallery website or phone 646-772-2407.

Jennifer Mackiewicz is a curator, artist and writer. She came to Beacon through DIA, working for the sculptor Michael Heizer as an artist’s assistant and operations manager.