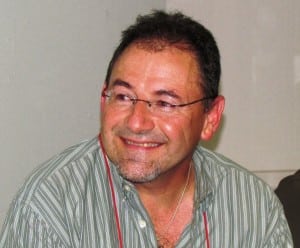 Term as president ends this month

Joe Curto has attended his last public meeting as president of the Haldane Board of Education. The monthly session held on Tuesday (June 19) was devoted almost entirely to praising him for his contributions to the school district since joining the board as a trustee six years ago. He spent three years as trustee, one year as vice president and two years as president. His term officially ends on June 30.   One by one, his fellow trustees, past board members, administration, retired staff, PTA representatives and others heaped praise on Curto.

The resolution passed by his fellow trustees recognized him specifically for his role in upgrading the district’s technology program, increasing public trust and developing and implementing the district strategic plan. It went on to say that Curto’s leadership also improved morale and Haldane’s reputation in the community. It highlighted his advocacy for fiscal responsibility and transparency, his handling of district contracts and his understanding of the importance of open communication with the public.

While the resolution hinted at it, the personal comments and the tone of voice from those who offered comments were what really brought home the depth of affection and respect that the community feels for Curto. “You are a true listener. You listen to every opinion. You have never left a question unanswered,” said Middle School Vice-principal Julia Sniffen.

Trustee Michael Junjulas, who will likely succeed Curto as president, said, “I appreciate your honesty, your passion. I know I can always call you.”

Board Vice President Gillian Thorpe has served with Curto on two different boards. “You’ve been such a huge mentor for me both on the school board and on the Haldane Foundation,” she said.

Trustee Evan Schwartz said he felt Curto has set a standard that goes beyond the local community. “You set the tone for what is expected ​​of ​board members in this town,” he said. “You could be a model for what a board member should be across the state.”

Past Board President Dave Merandy, now a member of the Philipstown Town Board, also spoke. “Things were turbulent when you joined the board,” he said to Curto, praising him for being a calming influence. He also poked fun at Curto’s well-known habit of asking more questions than most trustees. Merandy said that often, towards the end of a meeting, Curto would utter six words that would hit his fellow trustees “…like a shot in the gut from Mike Tyson.” According to Merandy, Curto would simply say, “Just a couple of quick questions!”

Superintendent Mark Villanti summed up what many in the room said about Curto in various ways throughout the evening. “In public service you’re known for two things — what you accomplished, but, when all is said and done, you are known for who are. You are class. You are a gentleman. You are a thinker. You work at things until you get it. You are civic minded. You’ve inspired me….”

An emotionally-charged Curto was very brief. His voice cracking, he said, “I won’t say a lot. It’s not my nature. It’s been a good ride. And … thanks.”

The Haldane Blue Devils baseball team and their coaches were recognized for a winning season that included league, sectional and regional championships and a semifinal win in the New York State final four tournament before bowing out in the championship final. “I can’t say enough about these guys,” said Head Coach Tom Virgadamo. “They went above and beyond. It was a great season that didn’t end the way we wanted. But we learned about more than just baseball.”

“On a Mission” was the team’s motto in 2012, and Virgadamo has already selected the slogan he hopes will guide the 2013 team to a state championship — “Unfinished Business.” Villanti had some advice for the team after praising its members for their conduct both on and off the field: “Follow the values your coaches taught you. You made us very proud.”

Curto presented Virgadamo with a copy of Good Enough to Dream, a book by Roger Kahn that chronicles the author’s year as owner of a minor league baseball franchise. “Read it,” Curto said. “It’s your team’s story.”

Other business ​​Trustees accepted a letter of resignation from School Nurse Ann ​”Candy” Zgolinski, who will retire in 2014. She has been school nurse for 19 years.

High School Principal Brian Alm reviewed revisions to the school’s code of conduct. The meeting served as a public hearing on the document, and trustees will likely vote to accept the updated code in July. The document can be viewed on the Haldane website.