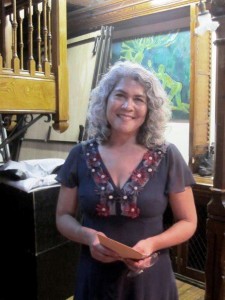 Local jazz pianist and composer, Sumi Tonooka, makes her live performance debut of songs from her newly-released CD, Now – Live at the Howland, at Cold Spring’s Chapel Restoration, June 30 at 7:30 p.m.  Tonooka has been hailed as “a profound artist, a fierce and fascinating composer and pianist,” by Jazz Times; “provocative and compelling, both in straight -out swinging situations and when she is developing fresh ideas for familiar ballads,” John Wilson, The New York Times; and “Revelatory … reminds you that originality is possible. She’s made her phrasing and touch personal; her lines breathe … her compositions … are rock solid without a moment of indecision or mistake. Technique is mastered by imagination, inspiration by intellect. She comes to her own conclusions, which is what jazz is all about,” Peter Watrous, Musician Magazine.

Tonooka’s attraction to jazz began at the age of 13, when she attended a live performance by jazz giant Thelonious Monk. “It was because of his music that I decided to become a jazz musician,” she says.  At 15, she left her hometown of Philadelphia to find creative sustenance in Boston with two legendary piano teachers, Margaret Chaloff and Charlie Banacos.  After paying her dues on the Boston scene, she moved to Detroit for her recording debut with trumpeter Marcus Belgrave, who served as a mentor for generations of Motown jazz musicians. Returning to Philadelphia, prior to her move to New York, she worked steadily with her trio, featuring drummer Newman Baker and bassist Tyrone Brown, which provided an outlet for her prolific composing.

Since moving to upstate New York in the late 1990’s, Tonooka has maintained a significant presence on and off the bandstand. She has taught at Rutgers University, and maintains a private home studio. She co-founded the internationally recognized recording label, Artists Recording Collective (ARC), which provides a platform for artists’ projects to reach a global audience.

Tonooka will be joined in one of her original pieces by Cold Spring’s Gwen Laster, violinist and Lucy Austin, vocalist, as well as by a couple of her local piano students.

The Chapel is located at 45 Market Street, Cold Spring; free parking is available on weekends at the adjacent Metro North Station. Admission by donation: suggested $15 adults/$10 students and seniors.