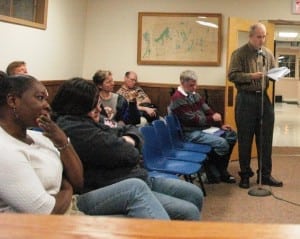 Board accused of law violations

Simmering slowly on the internet, opposition to Mayor Seth Gallagher’s salary hike erupted at the Cold Spring Village Board meeting last week with accusations that Gallagher engaged in “unethical behavior” and that the whole board “violated New York State law” in setting the higher pay. The allegations, brought by resident Michael Bowman, who in May created an online petition to rescind Gallagher’s raise, dominated the last part of the board’s formal monthly meeting June 12. The mayor responded that the salary question was considered by the entire board “as openly as possible.”

Gallagher’s raise took effect on June 1, the beginning of the village’s fiscal 2012-13 year, and brings his total compensation package to $15,162. That breaks down as $11,621 in base salary; $1,041 for a committee chairmanship (the same amount trustees get for chairing key committees), and a $2,500 stipend as village budget officer. (Should someone else become budget officer, the $2,500 would go to that individual, not Gallagher.) Although he gets health-care coverage for himself and his family through the village-employee plan, Gallagher pays for it himself –- at a charge he pegged at $18,000 annually. 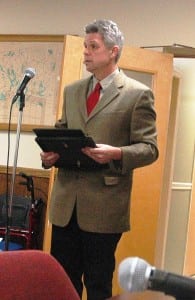 On April 17, the board held a public hearing on the then-draft budget. At the session, Trustee Bruce Campbell proposed a series of budget adjustments, including the pay raise, but the board took no action that evening. A week later, following further budget discussions, it boosted the mayor’s pay by $2,500, along with making other last-minute changes, including taking $2,000 from a $2,800 line originally devoted to an old MTA tax and using it for garbage truck upgrades and decreasing from 7.5 percent to 5 percent village employees’ share of insur­ance premiums under new health-care provisions. To fund the mayor’s raise, the board took $2,000 from a contin­gency account that had been earmarked for $12,500 — $3,650 higher than the fiscal 2011-12 contingent kitty — and reduced from $750 to $250 the amount allocated for the “mayor-contractual” account, which covers such costs as conference travel.

Bowman contends that by making decisions on the salary increase outside of the formal public hearing, the mayor and entire board acted improperly, invalidating its actions. “Seeing that the Village of Cold Spring Board of Trustees had never put forth any notice stating the proposed compensation of the Board of Trustees — which includes the mayor’s salary — and given the fact that the public hearing on the tentative budget had already been closed on April 17th, it is my belief that the actions taken by the Village Board on the evening of April 24th should be null and void as they have violated New York State Law,” Bowman declared in a letter he read to the board June 12. “In fact, by closing the public hearing and then adjusting the tentative budget to accommodate an increase in pay for the mayor, I believe that the Village Board, or at least the Village budget officer [Gallagher], has shown a pattern of unethical behavior by knowingly manipulating budget lines in preparation for a possible pay raise. Specifically,” he asserted, “money earmarked for the defunct MTA tax was purposely ​​​left in the budget for this reason.” Dated May 30, the letter is addressed collectively to the Village Board.

Bowman also said that state law demands that the proposed compensation for all board members be given in an official newspaper notice announcing a public hearing on a budget. Without enumerating on salaries or other details, the village’s official notice, dated March 30, stated: “The Board of Trustees for the Village of Cold Spring will hold a public hearing on Tuesday, April 17, 2012, at 7:30 p.m. at Village Hall, 85 Main St., Cold Spring, N.Y., to hear public comment on the tentative budget for the 2012/2013 fiscal year. Copies of the budget are available at the Village Clerk’s Office…. All interested parties are encouraged to attend and be heard.” 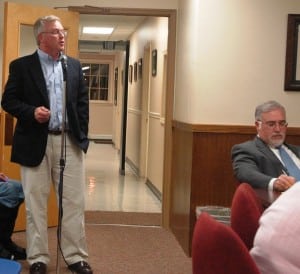 As a result of the various alleged errors, Bowman asked “that the Village Board please consider any budgetary actions taken on April 12 to be null and void” and that the village launch an ethics investigation of the mayor and board in regard to the budget and pay hike. “In addition,” Bowman said, “I believe that a clear conflict of interest has occurred in this matter, as the Village Budget Officer — who is also the mayor — manipulated taxpayer funds for his own financial gain.”

Gallagher replied that the raise was not in the tentative budget because “I do prepare the budget. But I didn’t want to include that, a raise for myself. I did ask the board to address that” in prior years. In 2010, a year after taking the office, Gallagher recommended that mayoral pay be increased by $5,000 but that the raise not kick in until after the March 2011 mayoral election. Gallagher won the 2011 race and in later setting the 2011-12 budget the Village Board increased his overall salary by $2,500 to cover his work as budget officer.

“Without question, the reason you have a public hearing and public comment and post a tentative budget is to possibly make adjustments to that and approve a final budget,” Trustee Matt Francisco agreed.

Bowman repeatedly tried to interrupt from the floor. When Gallagher persistently gaveled him down Bowman asked that “you take a vote of the five [board members] to see if I be allowed to speak.” He had already spent more than nine minutes reading his letter and making other remarks and no board member supported his request. 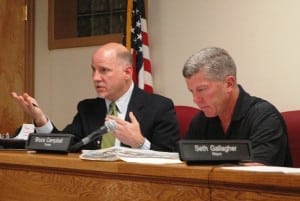 Trustee Ralph Falloon, noting reluctantly that although “obviously, this isn’t an agenda item, we’re here anyway,” asked Village Attorney Stephen Gaba about Bowman’s statements. “Is there truth to these? Is there any unethical and illegal action we did? Should this be addressed?” Gaba replied that he had reviewed the matter and “I didn’t see any procedural irregularities. As far as ethical violations: They sound completely spurious to me.”

Trustee Bruce Campbell, who had included the mayoral salary hike in a list of potential ​​​budget changes he proposed April 17, said, “I know how much time he [Gallagher] puts into this job.” Nonetheless, Campbell added, he would have backed a raise regardless of who is mayor. Campbell, as well as Gallagher and Francisco, recalled that the idea of a mayoral salary increase dates back to the administration of Mayor Anthony Phillips. In February 2009, acknowledging the long hours Phillips put in, then-Trustee Gordon Robertson suggested that the trustees give up half of their salaries to boost the mayor’s pay. The board did not act on his proposal. Drawing money from four trustees – who then included Gallagher – it would have increased the mayoral salary to about $24,000. On June 12, Robertson characterized the references to his 2009 proposal as “untrue. You’re paraphrasing” the record, he objected.

Trustee Charles Hustis revealed that after he had advocated Gallagher’s raise at the April 24 meeting he had tried to repudiate it, drawing flak for both moves. For initially backing the raise, “I’ve been attacked on the street verbally, and at times rightfully so … $2,500 meant a lot to people,” he said. Later, when “I saw the online petition, I sat back and actually turned around and signed it. If the world wants to condemn me for being a hypocrite and Indian giver, so be it. I did turn around — thought I could turn around and make a difference by turning around and signing the online petition.” Posted in mid-May, the petition had 118 names by June 19.

Francisco urged an end to the invective. The public can freely comment, he said. “That’s a great right we have in this country but with that right comes responsibility. To present things like this is some kind of backroom money-grabbing is highly inflammatory and grossly inaccurate.”

Bowman protested: “Just the fact we’re not allowed to speak….”

Gallagher suggested they adjourn privately to confer with Gaba on legal issues.

Robertson, and another audience member, Catharine Square, objected with cries of “no” and “you have more public comment.” Voting 3 to 2, with Gallagher, Campbell, and Francisco in favor and Falloon and Hustis opposed, the board then adjourned into closed session.