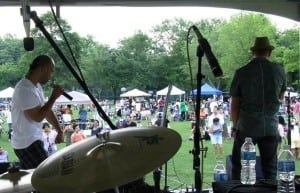 Band videos, photos and more can be viewed at the Riverfest website.

Local 845 is producing the event. Under the direction of musician and producer Stephen Clair, who was the recipient of a Dutchess County Executive Arts Award in Oct 2011, Local 845 has continuously produced concerts and live music shows in Beacon and surrounding areas since 2007. Local 845 presents a variety of original rock, folk, jazz and contemporary musical artists year-round at Beacon’s historical Howland Cultural Center and more non-traditional locales such as Open Space Gallery, University Settlement Camp and Spire Studios.

​In addition to launching Beacon Riverfest in 2010, Local 845 also produced Pete Seeger If I Had A Hammer: Concert For a House, a benefit for Habitat for Humanity presented at Washington’s Headquarters in Newburgh, New York. Since August 2011, Local 845 has produced Scenic Hudson’s Rhythm on The Riverfront Concert Series, four weekly free concerts in Beacon’s newly renovated Long Dock Park, and its In The Pines concerts at Beacon’s University Settlement Camp are one of the most popular mini-festival series in the region.​