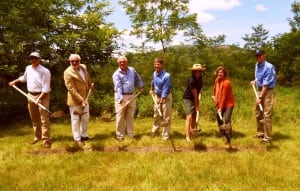 WPF work intended to illuminate the past and inform the future

With shovels in the dirt and words from the podium, Scenic Hudson on June 16 ceremoniously broke ground on construction to turn its 87-acre West Point Foundry (WPF) Preserve into an interpretive historical-environmental park. As planned, the visitor-friendly park will highlight the significance of the ruined ironware factory in the context of other significant activity in American history. Begun in 1817,  the WPF once crafted not only the cannons that helped the North win the Civil War but household goods, agricultural and railroad equipment, water pipes, and more.

Scenic Hudson’s $3.6 million upgrading project began a few days before the groundbreaking with the closure of the preserve, an area of woods, streambed and paths popular with walkers, runners, dog owners, and history and nature buffs. The site stretches about half a mile from Route 9D to the Hudson River near the MTA train station, filling a small valley. Along with ruins, the 1865 office remains.

Those who have explored the site over the last 19 decades range from modern schoolchildren to high-level representatives of the 5th American president, James Monroe, to the 16th president himself. “One of the key lures of the site is its mystery and allure,” said Steve Rosenberg, Scenic Hudson’s senior vice president, in welcoming the approximately 80 guests. “President Lincoln visited, standing very close to where we are right now.” However, Rosenberg explained, on that June 24, 1862, trip Lincoln seemed more interested in basic sustenance than in the big guns foundry executives wanted to test-fire for him across the Hudson. “I’m pretty confident you can hit that mountain over there,” Lincoln supposedly said, looking toward the opposite side of the river. “I’m hungry. Let’s get something to eat.” As Rosenberg added, “If land could talk, this land could tell incredible stories.” At the foundry’s height of activity, he pointed out, “almost 2,000 workers were here on any given day, working around the clock.” He described the WPF as one of the “most innovative … massive” industrial leaders of its era. 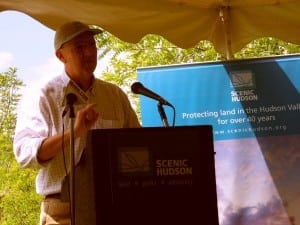 Fred Rich, chairman of the Scenic Hudson Land Trust board, cited the loss of land, including important places in the nation’s built-environment (human-made structures) and cultural landscape in the last 79 years. Half the sites noted in a 1933 survey were gone by the year 2000, and half of the East Coast sites have become parking lots, Rich said. He explained that the cultural landscape includes outdoor sites that are not wildernesses but important for other, multi-layered reasons. As an example, he pointed to the Hudson Highlands – significant environmentally and in terms of the environmental protection movement; historically because of the Revolutionary War, such Civil War-related sites as the WPF, and the history of villages, laborers, immigrants, entrepreneurs, and others; artistically, as the 19th-century Hudson River School of painters demonstrated, and in terms of countless other tales of places and people. “A cultural landscape is the richest and most precious land there is,” Rich said, because losing it means losing not only nature or open space but everything else embodied there. “We need to put our convenience aside and save the great places of the Hudson Valley,” he said.

​Linda Cooper, director of the New York State Taconic Region Office of Parks, Recreation, and Historic Preservation, tied the WPF venture to Gov. Andrew Cuomo’s fostering of economic development and partnerships among institutions and levels of government. “This project plays right into that,” she said.

Cold Spring Mayor Seth Gallagher officially greeted everyone and said the WPF project “is really important to the village. It’s always been a part of history for me. Of course, it’s history that’s been hidden.” Bringing the foundry’s past to life is crucial, and “not just for visitors but to residents and to the next generation, so that they understand the history of Cold Spring,” he said. “This was pretty much a company town” and that the village water system still relies on infrastructure built for the foundry, he observed.

Before the ceremony began, attendees joined Scenic Hudson guides on tours of the site –- probably the last chance to walk it before it re-opens after the construction ends, expected in autumn 2013.