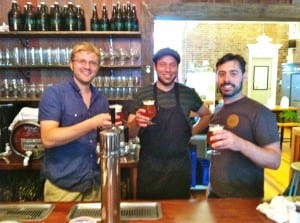 Beer, an alcoholic concoction as old as history, continues to claw its way into the U.S. public consciousness as an admirably considered drink beyond the usual mass-market portrayals. The specialty beer-making craft, undergoing a renaissance in this country for several years, has created a growing number of people who appreciate the same rich variety in taste, body, color, and yes aroma, as wine offers.

Introducing people to beer’s constellation of possibility is the mission of a new and popular establishment in Beacon.  The Hop at 458 Main St. is not a brewery.  Rather the owners seek to honor the beer craftsmanship of others. Upon entering you immediately experience a welcoming shrine dedicated to the discovery, celebration and enjoyment of beer’s long traditions and latest trends.

Lining the walls and shelves are over 100 different bottled beer brands, from which you can select, for example, a beer made in Germany from a recipe first printed in the 15th century. Behind the bar you will encounter an ever-changing menu of drafts from kegs shipped from breweries in the region, the country and around the globe.  Just ask for a taste to help you decide or even better ask for a flight of all the tapped beers so you can experience a mix of strong, sweet, bitter and smooth brews that will stimulate your taste buds in new ways.

And if you have questions about the stouts, lagers and porters, rest assured the proprietors are eager to answer them. They will also have some of their own.  “People come in and say we don’t know any of the beers on tap.  We ask them what they usually like, give them a taste,” said John Kelly, an owner and along with another owner, Matt Hutchins, a graduate of the Culinary Institute of America where their appreciation for beer first developed.

While Kelly is out front making converts or offering aficionados a taste from the latest barrel, Hutchins is in the kitchen creating plates of food that pair well with different beers and while the customer rules, they will be pleased to suggest combinations. “We want to elevate beer to the status of food accompaniment. Beer is better than wine in many circumstances,” said Kelly.

Kelly said they consider the place “as a sort of hybrid, not a full-on restaurant.”  There are only about a half-dozen round tables for seating along with a small bar and a large display case in the middle of the room around, where patrons can stand to drink, eat and ​socialize.  The plates are not entrees but rather inventive appetizers often using local ingredients such as cheeses, milled crackers and meats, which patrons frequently share with companions.  The menu isn’t large on a given night, but it changes often.

Open almost four months, The Hop has developed a following, with some loyalists toting their special Hop bottles for a refill from one of the taps. “People have begun to spread out the times that they come,” said Kelly, eager to encourage the idea there is room for more.

On one rainy Saturday afternoon, shortly after Kelly sent out a Facebook message announcing he had just tapped a new barrel, a richly aromatic brew from the Californian Green Flash Brewing Co., people began streaming in expressing gratitude a longer line had not yet formed.

The Hop is closed Monday and Tuesday; visit The Hop website  or phone  845-440-8676 for their hours and more details.