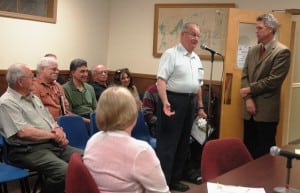 Cold Spring resident Joseph Immorlica heard words of honor ringing in his behalf last week when the village government issued a proclamation saluting his 35 years of service on the village Planning Board. Lauded by Mayor Seth Gallagher and four trustees and applauded by the audience, Immorlica stepped down from the Planning Board this spring. Read by the mayor at the Village Board’s June 12 meeting, the proclamation declared that Immorlica had “selflessly served the Village of Cold Spring with dedication and perseverance” and  “volunteered his time and talent …exercising good judgment and an extraordinary sense of commitment and determination to both preserve the existing character of the village and improve its future.” Signed by Gallagher on behalf of the whole Village Board, the proclamation also stated that Immorlica had “worked in a tireless manner on behalf of the senior citizens of this community” and made “extraordinary efforts to be an active and productive asset to his community.”

Immorlica also received a certificate from the New York State Conference of Mayors for “35 years of distinguished public service” to his local community. “You’re a great role model,” Gallagher told him, as current Planning Board members watched from the audience.

In response, Immorlica said “I sure appreciate it. I really wasn’t looking for anything, because I feel as if being a native of this community I enjoy it. I’ll do whatever I can for the community and the people of the community.”

One thought on “Cold Spring Honors Immorlica for Service”