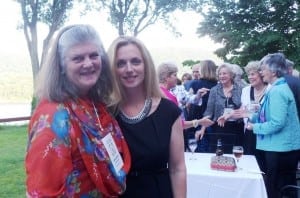 The Philipstown Garden Club, a member of the Garden Club of America, hosted the annual Zone III meeting this year on June 12,13 and 14.  There are 22 garden clubs in Zone III, which is comprised of the whole of New York state. Each hosts the others once every 20 years or so.  This year the 89 delegates came from all over the state, and stayed at the Thayer Hotel at West Point, where they also held their meetings.

The awards dinner was held on the final evening, June 13, in the Thayer Hotel dining room overlooking the Hudson. Opening remarks were given by Nan Berger, Zone III chairman, and congratulatory remarks were added by Marian Hill, president of the Garden Club of America.

Awards were given to organizations and members in Philipstown: the Zone conservation award went to Anne Osborn, president of the Philipstown Garden Club, and the Zone conservation commendation to Glynwood.  Stonecrop Gardens received the Zone horticulture commendation and Boscobel the Zone historic preservation commendation.  JoAnn Brown, past president of the Philipstown Garden Club, was a Medal of Merit recipient and Margaret O’Sullivan, also a past president, received a second place award for her photograph in the class Summer Sun in the photography show The Seasons of Trees.

The entire meeting was organized and coordinated by Carolyn Fadden who was assisted by Andrea Maasik, with JoAnn Brown as co-chair. The plans for this meeting started three years ago.