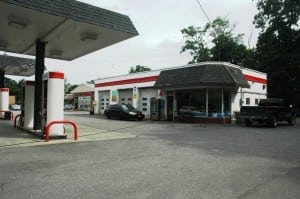 Questions arise about what report omits

A new study predicts minimal impact on traffic from converting the Elmesco car garage into a Dunkin’ Donuts franchise, complete with drive-through service window, at Cold Spring’s Foodtown Plaza complex on Route 9D. “No significant delays to traffic on Route 9D, or in the local road network, are projected to result from this project,” the study declared. But the report, prepared by Tim Miller Associates, Inc. of Cold Spring, does not discuss how Dunkin’ Donuts traffic will maneuver inside the plaza after turning off 9D. Instead, the document looks at “site access in detail and … intersection operations in the vicinity of the subject site.”

The Cold Spring Planning Board requested the traffic study but as of June 22 had not scheduled a workshop on it, said Joseph Barbaro, the board chairman, adding he could not comment further. The study was submitted to the village clerk’s office in late May. In the project, Ken Elmes, a Hopewell Junction resident who owns Elmesco Citgo Inc., a gas station and auto-repair operation, seeks to convert his garage into both a Dunkin’ Donuts outlet and convenience mart, while retaining the gasoline-pump sales. The doughnut shop would be next door to a building housing an existing carry-out coffee-and-pastry shop, the Main Course, and nearly on top of the Foodtown grocery (which also supplies carry-out food), as well as a stone’s throw from the coffee-dispensing convenience shop Daily Product at the adjacent Yannitelli liquor store–Drug World plaza. The study says that such factors do not come into play in local government decisions about Dunkin’ Donuts, warning that “the Cold Spring zoning code, similar to all codes in the State of New York, addresses land uses, not land users.”

Miller Associates projected that most Dunkin’ Donuts customers will drive vehicles already using the Route 9D corridor “transportation network.” A New York State road, Route 9D is called Chestnut Street in front of the Foodtown Plaza, although the name reverts to 9D just beyond the Drug World plaza when Chestnut Street and the state highway diverge into separate streets. According to the Miller study, “the number of new trips added to the transportation network from this project is anticipated to be 17 a.m. [morning] peak-hour trips and 15 p.m. [evening] peak-hour trips, as most traffic will enter the site from the existing traffic stream that already travels the local network on Route 9D.” The report projects a total of “97 a.m. peak-hour external trips and 57 p.m. peak-hour external trips, again mostly from trips [by vehicles] already on NYS Route 9D.”

​The study claims that “much of the traffic from coffee-donut shops is pass-by traffic,” cars passing back and forth on the road, which “creates an increase in turning traffic and reduction in through-traffic….” It relies on information from the Institute of Transportation Engineers (ITE) for its assumptions but notes that “ITE data has no pass-by rates for ‘coffee-donut shop with drive-through window’” and that Miller Associates turned instead to statistics for such entities as “coffee-espresso stand” or “gasoline-service station with convenience market” which “suggest the site would be attracting mostly traffic already on the transportation network and not new traffic to the area.”

The “level of service,” a measure of traffic flow effectiveness, receives a grade of “C, or better – acceptable – and will remain unchanged with anticipated area traffic growth and the site traffic added,” the study found. It also looked at the implications for nearby intersections if the Butterfield Hospital development goes through with a combination of residences and retail-commercial space. With nearby intersections “not highly sensitive to small changes in volume” from the Butterfield project–- that is, suffering only slight delays in traffic flow – and given “the low number of new trips added to the transportation network by the convenience mart and donut shop, acceptable levels of service are projected,” the Miller study concluded.

One nearby resident and skeptic, Judith Kepner Rose, took issue with the findings and wrote to the Planning Board on June 15, urging a more thorough analysis. “I have read the ‘traffic study’ that was submitted. It is worthless in helping us decide how crippled our traffic will be,” Rose wrote. “It seems to say that we will be fine because, gee, there won’t be a lot of added traffic. But the numbers it is using are general,” she objected. “Frankly, the numbers are so low that there is no way the franchisee could even stay in business given the cost of inventory and overhead.” She advised the Planning Board to insist on seeing the expected franchise’s sales and cash-flow projections over five years – “the real ones, the ones that told them ‘yes, we will be making a heap of money here in Cold Spring.’ Such projections are usual and expected for an investment of this sort,” she stated. “Then ask that those projections be used to create a real traffic study. And do scenarios of the traffic in and out of the property in the morning hours.”

Rose wrote that she had personally been stuck in the congestion around a Dunkin’ Donuts a few miles up the road in Fishkill, where drivers seeking to buy gas or doughnuts or both backed up on the main highway, disrupting traffic. “It is very easy to see it happening here in Cold Spring,” she told the Planning Board. “And, odds are, it would be worse, because on the Elmesco property there is less parking, fewer pumps, less space to distinguish parking from drive through, and a shorter drive-through distance from the street.”

The study also contains some puzzling items. For example, it points out that Elmesco shares 9D access with the Main Course building, which also houses Grey Printing and two other businesses and “has a vehicle narrow access to Marion Avenue between it and Wells Fargo in the Foodtown Plaza.” But the study adds that Marion Avenue, which runs behind the complex, provides access “directly to Route 301,” Main Street. Going north, Marion Avenue becomes Furnace Street, which has an intersection at Main Street only open to one-way, south-bound traffic. Thus that intersection provides access into Furnace Street-Marion Avenue but not an exit onto Main Street for cars headed north from the Elmesco station. Likewise, a key map ​shows St. Joseph’s Novitiate occupying the approximate site of the current Haldane High School and depicts the Marathon battery plant as still standing on Kemble Avenue, although both buildings are long gone. It similarly depicts a Kemble Avenue junkyard that disappeared years ago.