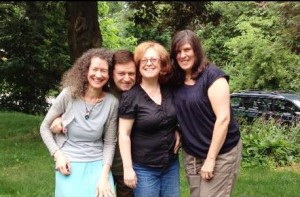 The Meridian Quartet. Photo courtesy of the artists

Rachel Evans, the quartet’s violist who lives Garrison, is thrilled to have the opportunity to present her music in the Hudson Valley, the place that she has called home for over 15 years. Like many local performers, Evans has found connection and kinship within the network of musicians and other artists who ameliorate the already bucolic hills and valleys of our towns. “I’m happy to be doing this concert in a place like Cold Spring that has been so welcoming to me as an artist,” she says.

Evans earned both a Bachelor of Music and a Master of Music degree from the Juilliard School of Music. In addition to the Meridian Quartet, she has performed in a variety of ensembles, including the Santa Fe Opera and String Fever, a jazz string group. For her chamber music work, she was a recipient of the Coleman Chamber Music Award. As an early musician, Evans has performed medieval music with Sequentia and with La Stravaganza Köln in Europe. She has also played baroque music with some of the country’s top ensembles.

Evans’s interest and mastery of such a variety of musical styles are reflected in the array of movements she’s chosen for the July 1 program. Selections will be offered from composers ranging from Joseph Haydn to Ruth Crawford Seeger (Pete Seeger’s stepmother), who was part of a string quartet in the 1930s whose aim was “finding an American voice and a way to express modern classical music. It’s a slow movement with all kinds of affect … of sounds being layered over one another … that swells and dies away,” Evans says.

She’s chosen Haydn’s Op. 20, no. 4, a well-known selection, that showcases the composer’s sense of humor and playfulness, as well as Dmitri Shostakovich’s String Quartet No. 8, which he dedicated to the victims of war and fascism and “is reflective of 1960s Russia and the oppression and the struggle for man to be an individual and express [himself].” The group will conclude with a String Quartet composed by local musician Art Labriola, a piece that Evans says is “full of joy” and will come around at the end of the program to balance out the heaviness and reflect “the potential and possibility that we live in now.”

Inspiration for the program came from the “tricky” current state of affairs of our world, specifically the politics of separation and dissonance that seem to be ubiquitous. Evans is motivated to use her music to “take back the voice of the individual, the power of standing together as individuals … [by] bridging some of the gap between the classical repertoire and the contemporary repertoires.”

Evans’s passion for exploring our shared humanity with her music—as well ​​​as exploring the limits of it—is evident in her prolificacy as well as the diversity that runs through the choices she has made as an artist. Along with traveling around the world with an array of ensembles, she can be heard on more than twenty recordings, from new music with New York’s Continuum Ensemble to medieval music with Sequentia. “My desire to have what I do have aspects of beauty and relevance and deep meaning for the consciousness of humanity and our immortality and our universality … is the reason that I love to share music with other people,” she says.

In addition to Evans, the other members of the Meridan Quartet include:

Deborah Assael-Migliore, cellist. Assael-Migliore is a founding member of the quartet who has played with the Harlem Chamber Players, the American Symphony Orchestra, the New York Pops, Little Orchestra Society, and the New Jersey Symphony. She is currently working on Broadway in the musical Newsies.

Lisa Tipton, violin. Tipton, also a founding member, is an advocate of American music. She established the Made in America series at Carnegie Hall and recorded the Ives Sonatas Hammers and Strings on Capstone Records with pianist Adrienne Kim. Tipton is the director of the New York Youth Symphony Chamber Music Program, a faculty member at the School for Strings and is currently working on her doctorate at the CUNY Graduate Center.

Sebu Sirinian, violinist. Sirinian is from Romania and performs chamber music with the Simon Quartet, the American Symphony Orchestra, the Stamford Symphony, and the Brooklyn Philharmonic. He has been a member of the orchestra for several Broadway shows including Phantom of the Opera and Evita.

Philipstown.info is located at 69 Main St., in Cold Spring. Wine and cheese will be served.​