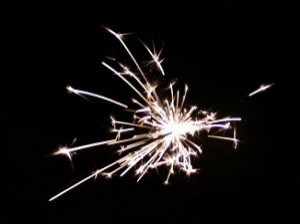 Sheriff warns against unsafe and unlawful use

As Independence Day approaches, Putnam County Sheriff Donald B. Smith is cautioning County residents about the dangers posed by illegal fireworks.  “July 4 is the quintessential American holiday,” and we Americans love to celebrate our independence and our freedom in many traditional ways: marching in or watching parades, enjoying backyard barbecues with family and friends, and ‘oohing and aahing’ at professional fireworks shows.  All too often, though, the happy holiday is marred—and sometimes very tragically—by the unsafe and unlawful use of fireworks,” said the Sheriff,

Smith pointed out that even relatively small kinds of fireworks, such as firecrackers or sparklers, could be dangerous, especially when used by children without adult supervision.  “Firecrackers can injure fingers or break eardrums, and sparklers burn at very high temperatures that can injure the skin or eyes.”  Larger, more powerful items, such as Roman candles and skyrockets, can cause even more severe injuries, he added.  And the danger of injuries is not the only risk at stake, noted the Sheriff.  “Fireworks aren’t just unsafe but, as a matter of state law, they are also illegal.”

Around every July 4, the Sheriff’s Department receives a large volume of noise complaints from residents complaining of persons setting off firecrackers in their neighborhoods. In other less frequent cases, the Department investigates complaints of vandalism involving fireworks, such as the use of M-80’s to damage property, such as mailboxes.  In those kinds of cases, the offenders could face arrest for criminal mischief, as well as for unlawful possession of fireworks.

Sheriff Smith noted that, in addition to facing criminal sanctions, people who sell or furnish fireworks to others could find themselves defending against civil lawsuits if those fireworks cause injuries to persons or property.  “Any way you look at them—criminally, civilly, or as a matter of health and safety—fireworks are a risky thing.”

The Sheriff said that he hopes people would leave the fireworks displays to licensed professionals this upcoming holiday. “Officially sponsored and professionally performed pyrotechnic shows are scheduled in our area for the July 4 celebration,” said the Sheriff. “I encourage everyone to go out and enjoy those marvelous shows without risking their safety, which is our main concern.”