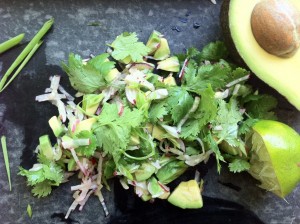 These radishes are starting to get to me. For several weeks now, I’ve received a bunch as part of my CSA allotment. Each time, I bring it home and make space for it in my refrigerator alongside the previous week’s radishes, and the ones from the week before that. I suppose I could just not take them.

But I am someone who likes radishes. They are pretty and very healthy: high in Vitamin C, they also contain cancer-fighting agents and phytochemicals that improve liver and gallbladder function. Plus, the name of the oblong ones, “French breakfast radishes,” always tricks me into thinking that I might start eating radishes for breakfast, alongside a bowl of café au lait and a copy of Paris Match, and thereby improve my je ne sais quoi. I will never find out, however, because when I roll out of bed in the morning, I am never in the mood for radishes.

Lunchtime is different, though. At midday, I can even get my kids (well, two of the three) to eat them, if I slice them extremely thin, and layer them on good bread that I have spread generously with butter, and sprinkle them with sea salt. Radishes happen to taste great this way, although I am not entirely convinced that this is the highest and best use for butter. I mean, if you are trying to limit your butter consumption, would you rather use up your daily allotment on a radish sandwich or a slice of cherry pie?

Perhaps a better use for radishes, then, is to cut them into mini matchsticks, toss them with cilantro, scallion, and avocado in a dressing of lime juice, salt, and a teensy bit of sugar, and use this garnish or slaw to top tacos. (Foodtown sells excellent soft corn tortillas for this purpose; the only other things you need are ground beef, fish, or beans; taco spices — mixed yourself, or from a package — and sour cream.) The lime juice and salt tame the radishes’ bite, and the combination brightens and balances the spicy, savory flavor of your chosen protein in a superb way.

But this recipe uses up four, maybe five, radishes. Which leaves another seven languishing in the refrigerator. Up at the sleep away camp where I am cooking for part of the summer, the farmer, Rachel, doesn’t bother even growing radishes anymore. “Kids don’t eat them,” she told me when I went looking for some. I considered debating this point with her, but then thought better of it. After all, I have 31 radishes in my refrigerator saying she is right.


Slice the radishes as thinly as possible, then stack the slices and cut into matchsticks. Pull off the cilantro leaves; discard stems. Skin and pit the avocado, and cut into small pieces. Slice the scallion into slivers.

In a bowl, combine the lime, honey, and salt. Add everything but the avocado, and gently toss to combine. Let sit for 5-10 minutes to allow the flavors to blend, then gently toss in the avocado.