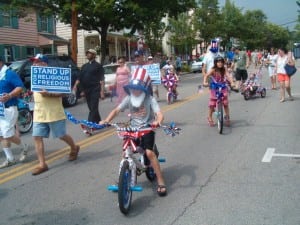 Cold Spring’s July 4 Community Day 2012 will be long remembered for its competing fireworks shows. First Mother Nature sent lightning bolts, thunder and a spritz of rain, scattering some of the audience of several hundred. That dramatic riverfront display served as a prelude to the planned presentation supplied by Majestic Fireworks, Inc. and underwritten by this newspaper.​

As the 9 p.m. fireworks start time approached, an ominous cloud line rolled southward across the Hudson Valley electrifying the crowd seated on blankets and lawn chairs. Debates as to safety and resolutions to stay put were heard all across Dockside Park. Those who waited were treated to a dazzling light show culminating in several lighting strikes, including one atop the aptly named Storm King Mountain. Phones and cameras held aloft, many also applauded and shouted approval as the storm of mostly noise and light continued its march south.

The approximately 20-minute choreographed bursts of sparking light and rockets’ red glare also garnered enthusiastic approval from the patient and appreciative crowd. Many people returned after discovering the storm had moved on.

Gallagher began the festivities by thanking local businesses for their support of the event, noting Pidala Electric for providing electricity and the Philipstown Highway Department for the use of their stage and equipment. Gallagher also acknowledged Gordon Stewart, sponsor of this year’s fireworks, who expressed his gratitude to the community for supporting the event and stated, “I have never, ever spent the Fourth of July in a place that is more symbolic to the founding of our republic than in this place that is across from where it was established and protected. I want to thank you all for being here.”

A feeling of gratitude and an acknowledgment of the community’s historic relevance in the fight for independence were sentiments that suffused many of the comments made by other speakers.

“Thank you for holding a beautiful celebration,” Hayworth said. “It is always a joy to be here in Cold Spring. This is the birthplace of our ​freedoms. This is where they were fought and won. Thanks to all of the veterans that were here today and all our active service members. You are the legacy of those remarkable men and women who fought for our freedom in 1776 and beyond.”

Galef reminded spectators “to think of who came together to establish the Declaration of Independence,” noting “that they were able to pull together in compromise.” 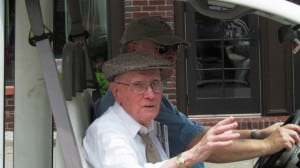 Local historian Donald MacDonald was formally honored with a proclamation on behalf of the Village Trustees and the Village of Cold Spring. Gallagher presented him with a framed decree that read in part, “To Donald MacDonald … for faithfully serving our community, devoting his time and talents to preserving the history and traditions of Cold Spring … and for providing a sense of pride and appreciation for our community. … It is fitting on this day when we are collectively celebrating the history of our nation that we recognize the importance of history in our lives and the effort of our local historian.”

​Children participated in a bicycle-decorating contest, and the following winners were announced: first place, Reva Sandlund; second place, Roy Smith; and third place, Mackenzie Warren. The Hudson Valley Shakespeare troupe performed scenes from each of this season’s productions, and members of the Hudson Valley Dance Studio showcased their skills with choreography performed to Katy Perry’s song Firework. The formal portion of the day ended with reading of the Declaration of Independence by former Village Trustee, Thomas Valentine.

For the remainder of the afternoon folks roamed the fields and banks along the riverfront. Live musical entertainment took place on two stages, food and drink vendors offered a variety of delicacies, and a jumpy house and water slides provided amusement for the kids.

As the night ended and people streamed away from the river, the reviews were almost universally good for the day’s events and both the fireworks shows. A few wondered with humor about the appropriateness of playing British Beatles music during the formal fireworks. But the day was best summed up by a young visitor. “The fireworks must have caught a lot of money, but it was worth it because it made a lot of people happy,” said 12-year old Claire Craig of Houston, Texas.

One thought on “Community Day 2012 All Smiles and Sparkles”