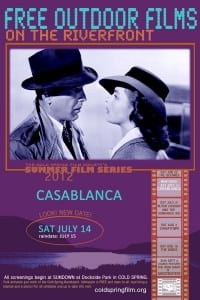 The immediate success of last year’s free outdoor movie screenings at Dockside surprised even its organizers, the Cold Spring Film Society (CSFS). Founding member Jennifer Zwarich said the group hesitantly expected maybe a few dozen at its first screening last summer. Instead nearly 700 turned up for the June showing of Princess Bride. Though audiences for the later films never reached that peak, all of the films were very well attended, with close to 400 turning up for Hitchcock’s North by Northwest later that season. The instant popularity triggered the addition of a fourth screening last year, and this year the organizers have increased that number to seven, including a double feature as a finale. That translates to one every other Saturday over the course of the summer.

Those seven films will be shown on a slightly bigger screen this year; at 22 feet wide the screen will now allow the five out of seven films shot in Cinemascope to be shown in the correct aspect ratio, taking up the full screen. Members of the Cold Spring Film Society have built this new screen themselves, using a kit and conduit pipes. Lest you think this involved a large crew of people, think again, as the founding members of the CSFS are a very small group of people numbering no more than five or six and handling everything from advertising to sponsor recruiting to clean-up. They are actively seeking new members, both those who want to participate in pulling these evenings off, and those who simply want to support the endeavor and see it continue as a Cold Spring fixture for years to come.

To that end memberships are being offered, with different levels, beginning at $20. Members are entitled to that most cinematic member benefit: unlimited free popcorn at every screening. In addition there are member discounts on t-shirts as well as other thank-you gifts. These screenings are not inexpensive to produce for the community. Licensing rights represent the largest expenditure, at a cost of about $400 to $500 per screening. Add in promotion and clean-up costs, and the “free” movies come at a price. In addition, CSFS aspires to own an outdoor projector. Currently they borrow an old one belonging to Rec and formerly used by Depot Docs. With a true outdoor projector they would be able to begin the screenings a little earlier in the day and to show films in high-definition projection. The speakers, too, are not designed for outdoor use. The society hopes this year’s membership drive will fund these future purchases. Memberships are tax-deductible, as the CSFS is a 501(c)(3) organization, and can be purchased through the CSFS website and also on site at the screenings, where credit cards are now accepted.

A tangible benefit of membership will be having a hand in picking future ​​films for screening. The CSFS strives to have a mix of genres, contemporary vs. classics, blockbusters and not-seen-enough gems, as well as films targeted at different age groups. The eventual line-up is not always the one first proposed, as a number of films are not licensed to be shown outdoors, or are priced out of consideration, or lie hidden in a vault somewhere. As an example, this year society members hoped to screen the Japanese anime fantasy Spirited Away but were stymied by the requirement that all such screenings need to be on 35mm, not via DVD. A requirement on the CSFS’s end is that the films be released in Blu-ray re-mastered editions.

The main mission, according to Zwarich, is to “bring movies that people might have missed out on which would be fun to screen outdoors.” As an example, she cites this year’s July 21 showing of Butch Cassidy and the Sundance Kid with its “amazing landscapes – and a lot of people haven’t seen it.” An indication of the diversity of this area is that last year the CSFS solicited opinions on future films, and amongst the many submitted, hardly any films received more than one vote. Suggestions ranged from early silent to Terry Gilliam’s Brazil. Only one film received multiple votes, and that was Goonies, which served as season opener.

One older classic is always featured, and this year that role will be played by Casablanca, set to screen on Saturday, July 14 at sundown (about 8:30 p.m.) The original date of July 7 was rescheduled due to the West Point fireworks that evening. Casablanca’s current reputation as a classic was not always the case, says Zwarich, offering up some background on what is for many people their favorite movie of all time. “The original script isn’t exactly what wound up on screen,” says Zwarich. “For example, the character of Sam was originally written as a woman, with Lena Horne envisioned in the role.” Dooley Wilson, who played the part of Sam, did not actually know how to play the piano with which he is so associated. From a historical perspective, the Nazis invaded Casablanca in early November 1942, and the movie was rushed out, accordingly, on Nov. 26 of that year. There was talk of adding an epilogue noting the invasion, but “they knew at that point it was good,” says Zwarich, “and they just wanted to get it out there quickly.” And of the two phrases everyone associates with the film, the first, “Here’s looking at you, kid,” thought to be an ad lib from the film’s star, Humphrey Bogart, is rumored to have been spoken by him in an earlier film. As for “Play it again, Sam,” the line actually reads, “Play it once, Sam, for old times’ sake. … Play it, Sam. Play As Time Goes By,” spoken by Bogey’s co-star, Ingrid Bergman.

Filmgoers are encouraged to come early and bring a picnic. Folding chairs should be set up around the perimeter so as not to block the view of those on blankets. Future screenings not mentioned earlier are: Aug. 4/Chinatown; Aug. 18/The Birds; and Sept. 2/Iron Giant and Ghostbusters double bill. For more details and to learn more about membership, visit the CSFS website.
Photos courtesy of CSFS