The Cold Spring Board of Trustees Tuesday (July 3) continued dipping into the village’s 7-month-old Local Waterfront Revitalization Strategy (LWRS), which calls for revamped zoning districts and — well before the Dunkin’ Donuts controversy — urged a ban on drive-through sales windows at the Foodtown Plaza.

Despite its name, the strategy covers the whole village and both reflects the village’s Comprehensive Plan and goes beyond it. Thanks to New York State acceptance late last year, the document could be followed by a full Local Waterfront Revitalization Plan/Program, a sweeping initiative that would link the village to coastal zone management policies at state and federal levels. 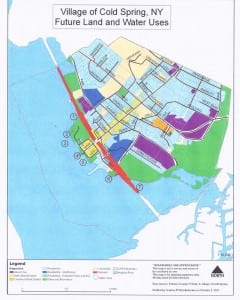 Drafted by the Special Board for a Comprehensive Plan-LWRP,  the strategy proposes replacement of such current zoning categories as R1, single-family residential; B1, Main Street commercial area; and B2, the Foodtown Plaza shopping center area, by new designations, such as Residential and Residential-Multi-family, Main Street District and Chestnut Street District. Other areas would be for Mixed-Use, Parks and Recreation, Community Use — for governmental buildings and such institutions as a church or a library, Railroad, and Water uses.

In the Chestnut Street District, the strategy proposes that “to promote site layout that encourages walking, no drive-through establishments would be allowed.” The owner of the Elmesco service station at the edge of the Foodtown Plaza on Chestnut Street seeks to convert his car repair garage to a Dunkin’ Donuts franchise, using a drive-through window and no interior seating or tables.

The LWRS also proposes that the Chestnut Street shopping center area have two-story buildings, containing a mix of stores, offices and apartments, and “a traditional Main Street environment.” That means putting parking behind the buildings — a pattern regarded as more typical of historic villages than the present arrangement of parking in front of the store block, considered a suburban format unfriendly to pedestrians.

Resident Judith Kepner Rose, who lives on Marion Avenue, the street behind the Foodtown Plaza, said the changes could give commercial property owners more possibilities. Frequently, “developers aren’t very creative and this actually gives them some vision,” she said.

Much of the board discussion focused on how to handle such parcels of land as that occupied by the Clinton Funeral Home, located in a residential area, should the funeral home cease to operate, and those in a Community Uses category, should buildings that now house government functions or nonprofit institutions no longer serve those purposes.

“What control do we have as far as compatible use?” Trustee Matt Francisco wondered.

Mayor Seth Gallagher said that “any type of business is going to have to go through the Planning Board,” which can consider the neighborhood impact of the proposed new use.

From the audience, Special Board members observed that originally in Cold Spring, residences stood alongside businesses, including taverns. “I think this is a very important point. The traditional village included a lot of different uses scattered among residential areas,” ​​Special Board Vice Chairperson Anne Impellizzeri told the Village Board.

Even when zoning permits a certain activity, limits exist, the mayor added. “Zoning allows it. It doesn’t guarantee it,” he said.

The LWRS also calls for tax-positive development, to ensure that a new use or growth does not end up costing the village more in services than it pays back in tax dollars, including school taxes, typically the highest share of local tax bills. However, “for me, one difficult problem is assessing what the tax effect is on the school system,” Gallagher said, because “obviously, you prevent kids from being in the village.” When it comes to housing growth and school taxes, the Town of Philipstown “is going to have a larger impact ultimately,” he said. 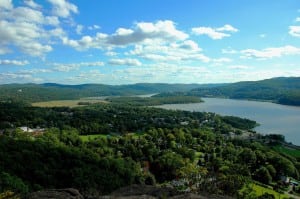 The LWRS proposes waterfront areas for fishing, power boats, ferries, kayaks and canoes, but a questioner asked about jet skis.

“You haven’t addressed stuff like that — nuisances,” Gallagher pointed out.

“In a harbor-management plan,” under a full waterfront program, “we would,” Impellizzeri replied.

Overall, the mayor said, the LWRS “seems to be pretty well thought out and to make a lot of sense.” And, he reminded the Village Board, as they continue to review it, “we can make changes” and “tinker” as they desire.

In related discussions, the board went through several Comprehensive Plan recommendations, to begin narrowing down priorities. “I would say that 25 percent of this is either being worked on or has been completed,” the mayor said, ticking off such suggestions as making the sewage treatment plant more energy efficient, creating a system for docking visitor tour boats and similar vessels at the village dock, repairing existing sidewalks and installing them in areas lacking them.

The mayor also updated the board on the ongoing effort to create a Hudson River Fjord Trail linking Cold Spring to the Route 9D trailheads and Beacon and beyond. One potential link, dubbed the River Walk, would bring visitors from the Cold Spring Metro-North train station through the village and allow them to reach Little Stony Point and the Bull Hill and Breakneck trails via the Fjord Trail. North of the village, pedestrians now must walk along narrow Route 9D, with its speeding traffic.

Within Cold Spring itself, “one area that has been kind of iffy and dangerous for pedestrians is going past the ball fields at Mayor’s Park” on Fair Street, Gallagher said. “Certainly, the thing to do would be to have a walkway,” which could be accommodated by moving the fence and reconfiguring the parking. “It would create a safer place for people to get to the trailheads, including village residents, and also to use the fields there. The path would be good for hikers, but [likewise] for kids,” arriving and leaving Mayor’s Park, whether on foot or as parents pick them up with cars, he said.

But Trustee Bruce Campbell cited “the many, many people, especially residents from the village, who oppose the plan, for one reason only — it gets people coming off the train … and not ever stepping on Main Street, not spending a dime.”

Impellizzeri objected, saying that the River Walk concept has three distinct parts, including “multiple paths” through the village, “which would do that” — encourage visitors to patronize local shops.