Scouring and lining a 117-year-old pipe 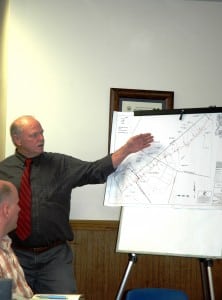 Installed when Cold Spring established its water system in 1894-95 and subsequently never cleaned, the pipe runs under Fishkill Road in Nelsonville and down Main Street. The village’s consulting engineer, Ron Gainer, said Tuesday night that the repair crew would start with preliminary tasks the week of July 9 and initiate “any substantial operations” the week of July 16. That will temporarily decommission the pipe, so interim bypass lines will run along the curb to serve homes and other buildings as the work progresses, he said. The work, involving a stretch of street about 8,000 feet in length, will begin on Fishkill Road near the Philipstown Highway Department garage in Nelsonville and then move around the corner to Main Street, continuing to the tracks, covering about 1,200 feet of ground per week, he explained. Gainer added that residents would receive alerts before the work reaches their properties and that the bypass lines that serve them would also meet firefighting needs.

“I certainly don’t believe there will be any significant change” in fire flow from the existing level, he said. “This pipe has never been cleaned. I’m willing to bet” that the build-up, or tuberculation, has so encrusted the interior that the original 10-inch pipe is effectively a 6-inch-wide pipe, Gainer said. As well as reducing the water flowing through the pipes, the encrustation has contributed to the “dirty water” shade residents often notice, he said. 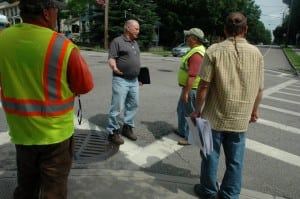 Gainer and Phillips at the site of project.

In March, the board awarded the project contract to Mainlining Service, Inc., of Elma, N.Y., which submitted the lowest bid, at $965,800. The crews will excavate the street to reach the pipe, scour it and then line it to prevent further encrustation.

Gregory Phillips, superintendent of the Water Department, said that the work will cause some inconvenience for residents, including water discoloration. “It’s going to be minimal but it’s still going to happen,” he said. On the bright side, however, he announced, the water from the bypass lines will not be metered or billed. He told the board in June that he expects “substantial completion” of the work in mid-October.

Gainer also said that while the work is underway, one lane of traffic would remain open on the street and “the intersections themselves will be open.”

One thought on “Water Main Repairs to Begin Mid-Month”