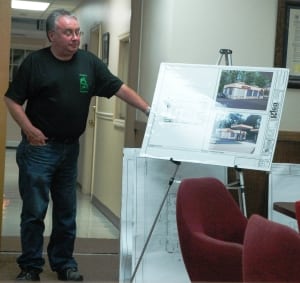 After nearly an hour and 45 minutes of discussion focusing on such issues as lighting, treatment of the back, and pedestrian hazards, the Cold Spring Historic District Review Board (HDRB) mid-month continued the formal public hearing on conversion of the Elmesco Citgo Inc. car-repair garage into a Dunkin’ Donuts franchise. It set the resumption of the hearing for Aug. 8.

At the HDRB meeting, July 11, the design for the converted building itself -– reminiscent of a 1950s gasoline service station -– generated limited controversy, with some HDRB members saying that it fits in with the mid-20th-century shopping center aesthetics just to the south, although not necessarily with the 19th-century architecture of the village around the strip.

“We’re bringing it back to almost where it was in the 1950s,” but with “a more modern look,” said Cynthia Falls, architect for building owner Kenny Elmes.

HDRB Chairman Al Zgolinski declared that “there are different neighborhoods in the village,” each with its own character. This is set in the context of the Foodtown Plaza shopping strip and “fits into the context” there, he said.

Board Member Kathleen Foley recalled that the board had debated the design at length in previous go-rounds. “This area represents, for better or worse, 1950s strip development as manifested in Cold Spring,” and the board saw merits in “embracing that period of time” and the proposed Dunkin’ Donuts appearance, she said.

“What’s wrong with people?” asked Lila Gold, a Brooklyn resident with a house at 6 Chestnut St. “Every town in the northeast has a strip mall. What’s the fuss?” She said that village newcomers “seem to be the people who complain the most. I think the arguments are spurious and come from not knowing.” However, Gold urged Elmes and Fall “to lower the lights.”

An Elmesco neighbor, David DiVico, of 18 Chestnut St., told the board that “I don’t have a problem with the look. They could put a bordello there and I wouldn’t care.” What causes concern, he added, is the potential for intrusive glare. “It’s all about the lights. I just want to see less lights.” 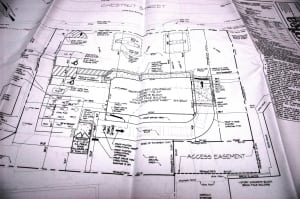 Dunkin' Donuts plans show the back of the building, with drive-thru window. Photo by L.S. Armstrong

The menu board or sign planned for the back of the structure, where the drive-through donut-supplying window will be located, prompted many of the lighting qualms, especially if the sign is back-lit. The large Citgo sign, recently damaged and in need of fixing or replacement, aroused concern as well.

“I’ve never run into this” lighting problem, Falls observed, saying that the menu board lights would be as low level as possible. “You’ve got to be able to read it. We want this thing to function,” she said.

“But for us it’s setting a precedent,” HDRB Member Peter Downey informed her.

“We consistently deny internally illuminated signs,” Foley added. “The bigger issue for me is precedent.”

​​​“If there is a menu board, it should be treated exactly like any other sign is treated, in that it should not be back-lit,” said Judith Rose, who lives on Marion Avenue, the street that runs behind the shopping area. She said that “I love Dunkin’ Donuts,” but that questions remain about the outlet planned for Cold Spring. “I would hope you would be as rigorous with the drive-through as you would be with the front of the building,” she told the HDRB.

Other residents also focused on the drive-through — the main way of getting the donuts, as there will be no indoor seating or tables in the structure — and the back of the building overall.

“My feeling is, the back is the back,” Zgolinski said.

Others sought more attention to that side of the building.

“I’d love to hear a lot more about what’s going on in the back. I don’t know if anyone has thought about the back, but I would hope you do,” including consideration of the size of the menu sign, said Karen Doyle, who lives at 15 Marion Ave., behind the Elmesco site.

Patricia Healy, who lives at 22 Chestnut St., voiced reservations about car lights from Dunkin’ Donuts patrons shining into her bedroom windows but also wondered about the number of vehicles the business will draw. “I just don’t know how that’s going to work, with the size of the property and the traffic,” she said. “Can you eliminate the drive-through?”

The drive-through “is going to interfere with walkability,” the freedom for pedestrians to safely use the shopping plaza, HDRB Member Marie Early added. “It’s the safeness of pedestrians that I’m concerned about with Dunkin’ Donuts.”

As the discussion wound down, Zgolinski called for the public hearing to continue on Aug. 8. “I think the overall design is good,” he told Falls and Elmes. “I think there are issues that have to be addressed a little bit further.” But Zgolinski termed those “relatively small. I think the most significant concern I’ve heard is lighting. The issue is the amount of light. You are in a residential district.”