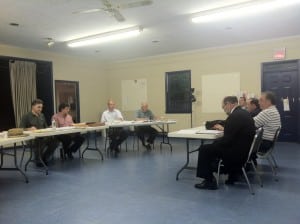 The controversial proposal to locate a Dunkin’ Donuts franchise and a convenience store at the Elmesco gas station on Chestnut Street went through a long and surprisingly prosaic Cold Spring Planning Board workshop last Tuesday, July 10.

An audience of no more than a half-dozen citizen observers turned out for the VFW Hall session and listened quietly to nearly two and a half hours of inquiry and discussion regarding mostly traffic and parking issues. Planning Board members, who at a past session appeared generally negative to the application, especially the involvement of an international franchise operation, were more subdued in their questions and reactions.

This time the approach was numbingly methodical as Joseph Barbaro, board chair, used a report from the board’s consulting engineer, Rob Cameron, as the basis for the meeting’s agenda. Cameron’s detailed review of the site plan resulted in a variety of requests for explanations and eventual calls for more information and study.

Traffic was at the heart of the workshop discussion. Traffic on Route 9D (Chestnut Street), added traffic resulting from the likely Butterfield site development and Foodtown expansion, and traffic flowing through the site as customers roll up for gasoline and/or donuts and coffee at the proposed drive-through window in the rear of the building were all part of the dialogue.

Board members also probed the possible impact of increased truck and van deliveries of donuts and other franchise products, supplies for the convenience store, garbage pickup as well as the continued delivery of gasoline.

While property owner and long-time service-station operator Kenny Elmes was present, it was the project’s architect, traffic consultant and the intended Dunkin’ Donuts franchise operator who held forth explaining their collective plans and intentions.

As to the project’s potential impact on street traffic, board members sparred repeatedly with James Garofalo, director of the traffic division for Tim Miller Associates, an area consulting firm. The Miller study has concluded that a Dunkin’ Donuts outlet and convenience store will not adversely affect traffic flow in either direction on 9D at any time of day, including the morning rush hour. Garofalo said that even taking into consideration the likely Butterfield development and Foodtown expansion he saw no basis for believing that existing traffic​​​ patterns would be impeded.

“We don’t add to the traffic, we take from the existing traffic,” said Paul Sardinta, who owns three other Dunkin’ Donuts in Westchester.

Barbaro and other members quarreled with the Miller study’s focus on Tuesday, Wednesday and Thursday traffic while not including Saturdays, which they thought was an especially busy time with visitors and locals alike active in the streets. But Garofalo said the mid-week days were the industry standard for such testing and that he very much doubted a Saturday study would yield a different result given the absence of the regular weekday commuter traffic flow.

“Cold Spring is lucky; it doesn’t have Route 9 running through it as other villages and towns do,” said Garofalo. “9D is not sensitive to small changes in traffic, and this is a small change.”

Cameron, the board’s consulting engineer, questioned the capacity of the site to handle the internal circulation of traffic from gasoline sales, a convenience store and a drive-through window. Ronald Lezott, a consulting architect for Dunkin’ Donuts, tried to reassure the board on this point asserting that the site had been handling drive-through business for 50 years, 25 of them under Elmes’ management.

“How many car lengths of backup into the street are you anticipating?” asked Barbaro referring to the car line for the window for ordering from Dunkin’ Donuts. “None,” replied Lezott.  He said Dunkin’ Donuts expected an average 90-second maximum wait for a drive-through customer once they placed their order, with as many as 10 cars able to queue for service. “If cars get backed up, you lose business,” said Lezott.

Garofalo also cautioned the board against using other Dunkin’ Donuts locations as a direct comparison for traffic and local impact. “The Fishkill site is on six lanes of traffic. This site doesn’t have as much traffic as others in the area. You are drawing from a smaller area; people have opportunities to go elsewhere,” he said.

Both Garolfalo and Lezott emphasized that with no seating in either store, customers were not likely to park for long periods of time.

The board also inquired about lighting, signage and the potential for disturbing noise from the menu intercom and service window. Lezott said lighting plans were in formation but would not be intrusive, that signage would comply with village code and that sound levels would respect federal regulations. The board also seemed satisfied with his explanation for the drainage of storm water.

In the end the board asked for a complete schedule of all deliveries expected for the businesses on the site, consideration of a Saturday traffic study, and more details on lighting and other issues.

​​​Another workshop was scheduled for July 31. Barbaro said there would eventually be a hearing to receive comments from the public. In the meantime he urged people to write to the Planning Board to raise issues about the proposal.