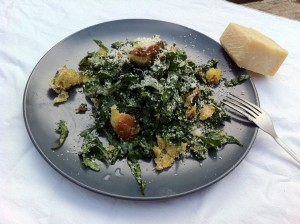 Some things are easy to love: others, not quite so easy​

Some things are easy to love. Others, not quite so easy, though the latter often turn out more rewarding for the effort. In that spirit, I hereby declare that I love my CSA (last week’s radish fit notwithstanding) farm share. I love the challenge of figuring out what to do with too many turnips or too little kale, one bunch being not nearly enough to make the recipe my kids like best — they complain when I use four. I love driving down the long driveway to Glynwood alongside the mossy, flashing brook, and the way the farm opens up like sunrise when you emerge from the shadowy woods.

Not to mention the fact that the vegetables keep getting better. Dave Llewellyn, Glynwood’s CSA manager, is something of a mad scientist when it comes to soil, monitoring it constantly and amending it with minerals, compost and other matter so that the plants are both healthy and healthful. His obsession makes a difference. Several recent studies have found that vegetables grown in well-amended organic soil are higher in a wide range of nutrients and antioxidants than those grown conventionally, in sterile soil. They also taste better: more complex and full-flavored.

But not everyone shares my devotion. I know because I asked. When I heard that Glynwood’s CSA membership was off this year – again – I tried to talk several friends into joining. They declined, mostly because they like having control over what goes into their refrigerators. But control – or lack thereof – is the whole point of this type of farming. Wende Elliot, who used to be an organic farmer in Iowa, once told me, “You can’t control the rain or what the weather’s going to bring. Farming is a practice of hope and faith. The chemical approach is that it’s a war: it’s you against the bugs and the drought. With organic, it’s not about control. It’s about participating in something bigger than you.”

In late winter or early spring, farmers invest an enormous amount of time and money in seeds and whatever they need to help them grow. Then they work. And work. If it’s a bad year, they might lose everything. If it’s good, they’ll profit, some. CSAs [the full name is Community Sponsored Agriculture] were intended as a way for the community, rather than a bank, to help them manage this uncertainty. Members pay up front, when the farmers need cash, and then share in the harvest, however abundant it turns out to be.

For many years, CSAs across America grew in popularity. The first two in this country began in 1986. Twenty years later, the USDA reported more than 12,000, and everyone I knew belonged – or wanted to. Four years ago, Glynwood’s CSA had as many people on its waiting list as members, according to Dave. The year after he arrived, he increased the CSA’s capacity, from 20 to 50, and the following year to 100. Loyal members continue to come back, but others have drifted away. I wish they wouldn’t, but what can I do about it? There are some things even I can’t control.​​

KALE CAESAR, or what to make with just one bunch of kale

Raw kale has more bulk than cooked, so a little bit goes further. Note: elderly people, children and those with compromised immune systems should not eat raw eggs; for everyone else, it’s smart to know and trust the farm they come from.

1T lemon juice (from about half a lemon)

Directions
Heat 2 T olive oil in a frying pan over medium-low. Add the torn bread and a dash of salt and fry the bread, tossing frequently, until golden and crispy.

Remove the tough stems and ribs from the kale leaves; discard the stems. Lay the leaves in a stack, roll them up and slice crosswise to make thin strips.

In a medium salad bowl, preferably wooden, mash the anchovy filet with a generous pinch of salt and the pepper using the back of a fork, to create a paste. Add the egg yolk and lemon and whisk briskly for 2-3 minutes until it thickens and looks creamy. Slowly drizzle in the remaining olive oil while continuing to whisk, so that the dressing emulsifies (i.e., the oil is incorporated and doesn’t separate). Taste and correct balance with more lemon, oil or salt. Remove about 2 T of the finished dressing from the bowl and set aside. (The amount your final salad needs will depend on the size of your bunch.) Stir the parmesan into the bowl. Add the kale and toss. Taste and add more dressing, if needed. Just before serving, tear the basil leaves into small pieces and add them and the toasted bread.

2 thoughts on “Mouths to Feed: A Control Freak’s Guide to CSAs”