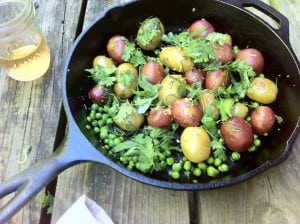 Potatoes are back! But perhaps you never realized they were gone? That’s because potatoes never actually disappear. One week you’re buying last year’s potatoes, and the next, hey, here’s this year’s crop. I never noticed the switch until a few summers ago, when I needed brand-new potatoes for a cooking project, and started grilling vendors at the Union Square greenmarket about whether their potatoes were from this year or last. (This was back when I lived in New York City, and the idea of grilling a farmers’ market vendor did not seem obnoxious in the least. It was just how you shopped.)

So we’ve all been eating 2011 potatoes for 12 months now — those of us who eat more or less locally and seasonally, at least. “Eating seasonally” generally means strawberries in June, peaches and plums in July, tomatoes and corn in August. And I do love those bright stars of summertime. But sometimes what makes my heart sing is the quiet arrival of vegetables that seem almost season-less, like potatoes, onions and garlic. Since about February, these staples have been turning mushier, spongier, grayer and wrinklier, no matter how freshly purchased, until finally it appeared that their whole raison d’etre was to grow long sprouty tendrils in your pantry and freak you out so that you’d just leave them alone to go about their weird business in the dark, rather than using them for dinner. 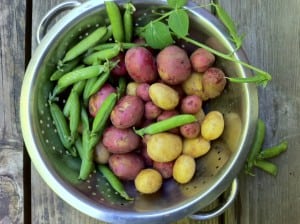 I am inclined to pause here a moment and wonder if it is wise for me, something of an old potato myself — a little wrinkly, mushy and prone to sprouting things I wish I would not — to be championing youth over age quite so vehemently. I do not look forward to the day when some tender young thing nudges me aside (which, to be honest, has already happened in more areas than I care to enumerate). Moreover, I appreciate the fact that, but for the stoic endurance of so-called storage crops like potatoes, onions and garlic, human civilization would never have gotten very far.

But survival is one thing, and pleasure something else. And darling little new potatoes fall squarely in the latter camp. A month ago, when my son Henry said, “I don’t like boiled potatoes. I only like them roasted,” I started plotting and planning and awaiting the day when the 2012 vintage arrived so I could boil them just so, finish them in a hot pot with a little sizzling butter, then regale them with a multitude of tender herbs and a scraping or two of lemon zest. We had them like that for dinner last night, with fresh shell peas that I’d also sauteed in the butter, a few slices of smoked salmon on the side, and chilled rosé in jelly jars for the grownups.

1. Place the potatoes in a pot and fill it with enough cold water to cover the potatoes by about an inch. Set over high heat, add a generous handful of salt and bring to a boil. Meanwhile, shell the peas and remove the stems from the herbs, tearing the leaves into small pieces.

2. Once the pot is boiling, the littlest potatoes (the ones that are about the size of the tip of your thumb) will be cooked through in two minutes; the ones twice that size will need four minutes, and so forth. Test them with the tip of a knife and remove them from the pot to a colander as they’re done. When all the potatoes are cooked, drain the pot, dry it with a dishtowel and return it to the stove over medium heat. Add the butter and allow it to brown slightly (it will smell nutty). Return the potatoes to the pot along with the shelled peas and allow them to cook about five minutes, shaking occasionally, until the potatoes turn golden in spots. Remove from heat, season with sea salt and pepper. Add the herbs and grate the zest of a lemon over it all.