“We want to move from the mode of catching people who victimize seniors to the mode of proactively preventing scams before they even happen,” said Schneiderman addressing an audience of 150-200 people.

The forum was Galef’s annual gathering for seniors, advocates and service providers held at the Cortlandt Manor Town Hall. The forum also included other speakers on a variety of topics affecting the lifestyles and health of the elderly. Philipstown is among the towns Galef represents in the State Assembly.

The attorney general, elected the state’s chief law-enforcement officer in 2010, said the theme of his new campaign is all about urging senior citizens to “Be safe, take control, fight back.”

“We have had a lot of experience in recent years, unfortunately, with prosecuting scammers of elderly New Yorkers. We have determined that affinity (targeted) fraud, fraud just against seniors, is going to grow.  So we have to get seniors the tools and the awareness they need to stop the frauds,” he said.

According to Schneiderman, seniors are most often targeted for financial exploitation, identity theft, telemarketing, sweepstakes frauds and home improvement rip-offs. Physical abuse of seniors, which takes a variety of forms, is also of increasing concern. 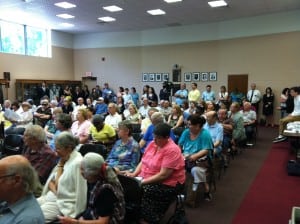 Part of the audience at the senior citizen forum. (Photo by K.E. Foley)

Schneiderman explained the economics of the burgeoning problem of fraud directed at seniors by contrasting seniors with today’s younger generation struggling with high unemployment and salary squeezes when they can find jobs. “Many older Americans have worked for a long time and have accumulated a nest egg,” he pointed out.

“More seniors are living longer and alone, more are on the Internet; all of this opens the door to a wider array of scams and frauds,” said Schneiderman. He also said many older people welcome visits and calls, especially from people who claim to know people they know. That’s where the problem begins, he asserted.

Schneiderman’s intent is to send expert presenters from his office​​​ across the state to appear at senior-citizen centers, care facilities, libraries, etc., to teach seniors about scams and how to protect themselves. He urged audience members to spread the word and to contact his office to arrange for a speaker.

“Seniors have to understand the techniques, who to alert or call for help, also how to protect themselves against physical abuse,” said the attorney general.

The attorney general said the “really unfortunate” aspect of the current situation is that the overwhelming number of cases of elder abuse and scams are not reported. He said that for every report received by law enforcement 23 incidents go unreported. He attributed this phenomenon to a lack of awareness of people’s rights for redress and not knowing whom to contact for help.

He also stressed that elderly people often suffer from embarrassment or shame over being victimized, making them reluctant to pursue a remedy or just ask for help.

The centerpiece of the attorney general’s Smart Seniors campaign is a 20-page booklet that describes in detail different forms of fraudulent activity and provides tactics and cautions for seniors (and all people for that matter) to employ when confronted with people who threaten their well-being.

In the opening chapter, the booklet characterizes the common elements found in any scam. These include a “hook” to distract a listener from the details under discussion or to let his or her guard down. A hook will usually involve money or greed, love or goodwill, or fear and desperation to appeal to the deepest needs in most people.

Among the many recommendations contained in the booklet, a few stressed are :

Never wire money to people you don’t know, no matter what they say; it’s the same as handing over cash.

Do not provide any of your banking information to any organization with which you are not familiar, especially when it is claimed you have won money.

Be careful not to trust a voice claiming to be a grandchild in trouble who needs cash right away, even when they seem to sound familiar and happen to know family details that they could have gotten from Facebook or other social media.

Be suspicious of contractors who have last-minute deals on cheap repair work to your home or who offer free ​​inspections.

Never give out personal information, including birthdate, Social Security number or any reference that might be a password, to an unsolicited caller, email or entity you don’t know.