Cold Spring-based artist Simon Draper is the founder of Habitat for Artists (HFA), a unique collaborative art project that is being featured at the Corcoran Museum of Art in Washington, D.C., where it opened on July 16.

In its five-year history HFA has included over 75 participating artists and has partnered with over 20 different organizations including schools, universities, farms, environmental centers, sculpture parks and festivals. Hudson Highlands Land Trust loaned HFA their adjacent field in Garrison for six vibrant artists’ residency projects during the summer of 2011. 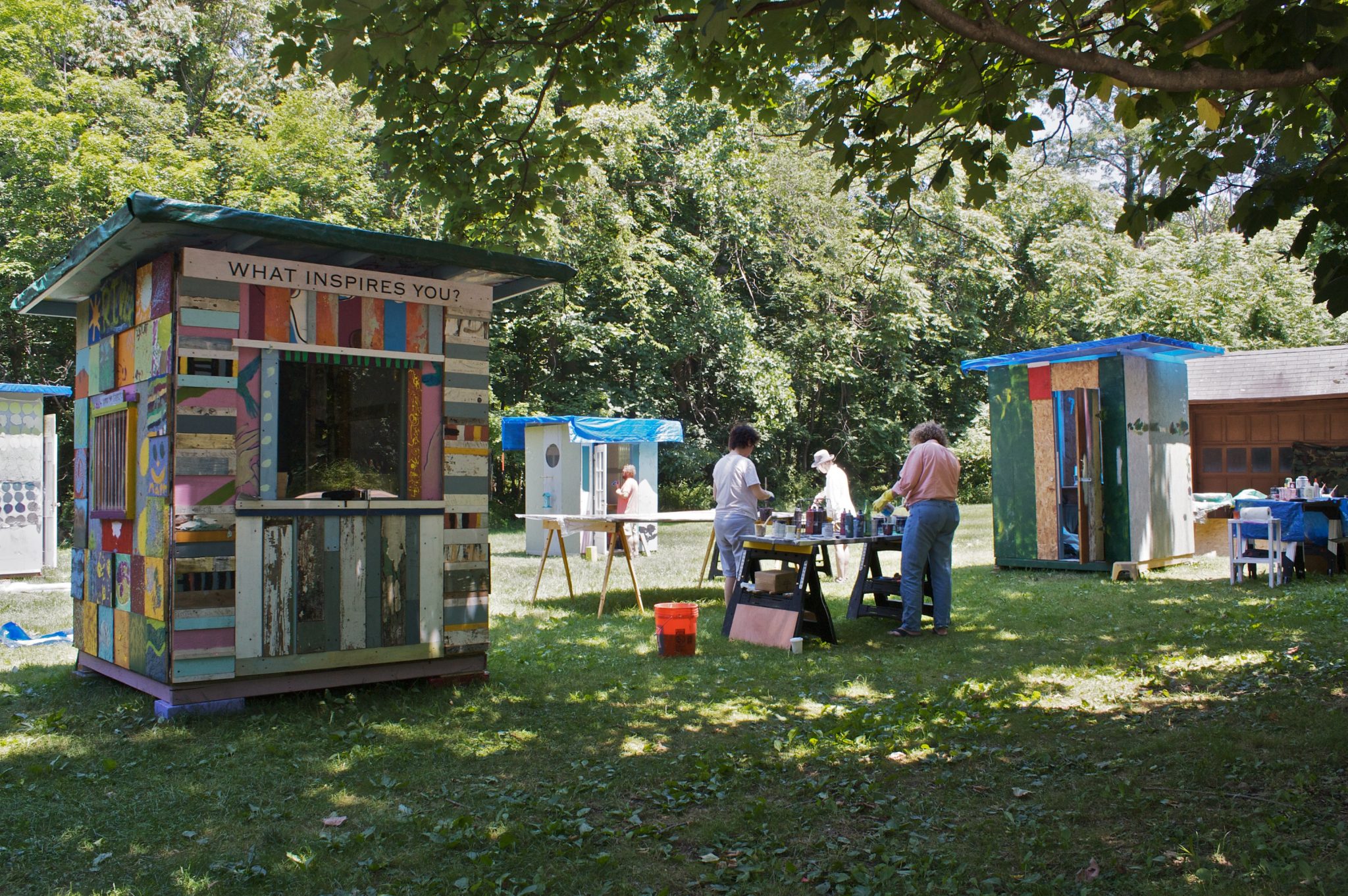 HFA builds small 6-by-6-foot temporary art studios made from reclaimed and recycled materials and invites artists to take up residence and work inside the space as well as on the exterior surface. The focus of these residencies is on the creative process more than creating finished, discreet artworks. The public is invited to engage in the process every step of the way via workshops, interaction and discussion with the artists.

I’ve had the pleasure of working with Draper and HFA since their inception on projects in the Hudson Valley, New York City, Philadelphia and Washington, D.C. There’s a core group of HFA artists, but the participants change with each new location and vary from six to 15 per project. I recently included HFA in a curatorial project in Washington this past spring.

It was part of a larger exhibition titled BiodiverCITY for the 5 x 5 Public Art Project in which, from March through June 2012 I curated five public art projects spread across the eight D.C. Wards. HFA, including Draper and his team — Michael Asbill (Kingston), Matthew Slaats (Poughkeepsie), Michael Natiello (Peekskill), Jessica Poser (New Paltz), Todd Sargood (Portland, Ore.) and Chere Krakovsky (New York City) — were located at THEARC, a recreation and cultural center on a sprawling campus in the Anacostia neighborhood. 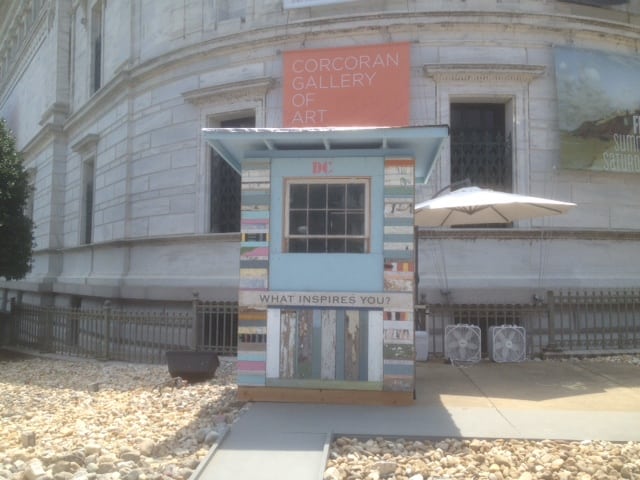 Due to the excitement and level of visitor participation generated over HFA’s stay at THEARC, Corcoran Outreach Program Curator Tara Malik invited Draper to bring a new version of the Habitat to the Corcoran Gallery of Art this summer. It will be stationed outside of the museum at 500 17th St. NW. Draper has invited many of the same artists to participate as well as some local D.C. artists and college students who will get involved at the Corcoran each week for the duration of the project.

​When we arrived to scout the location at THEARC, it seemed too far from the monumental core of D.C. to attract attention and bring visitors. Anacostia is a mostly African-American neighborhood — home to the Smithsonian’s Frederick Douglass Museum, south of the Anacostia River and geographically separated from the rest of the city. However after successful meetings and much enthusiastic support for the project from THEARC director Edmund Fleet and his partner organizations, Draper decided to call it the new (temporary) HFA home.

That decision turned out to be for the best. One or two HFA artists per week were on location every day, culminating in seven weeks.

Over the course of their stay at THEARC each participating artist would find different ways to engage with the public. Though they came with preconceived ideas, their projects often changed or evolved as everything was being created there on site and in the moment. Being present and adapting depended on who arrived; the experience of interacting determined the outcome of each day’s work, meaning that the place, the people and the content is the artwork itself.

For Chere Krakovsky, a daily performance art piece involved serving tea and cookies, which generated lots of discussion, a video created by teenagers, lessons on how to make the best tea, and many drawings. Matthew Slaats collected words from his visitors, which then became “moss sculptures” in the nearby garden. Michael Natiello created handmade paper from junk mail and collected trash to make mandalas with kids out of the refuse material. 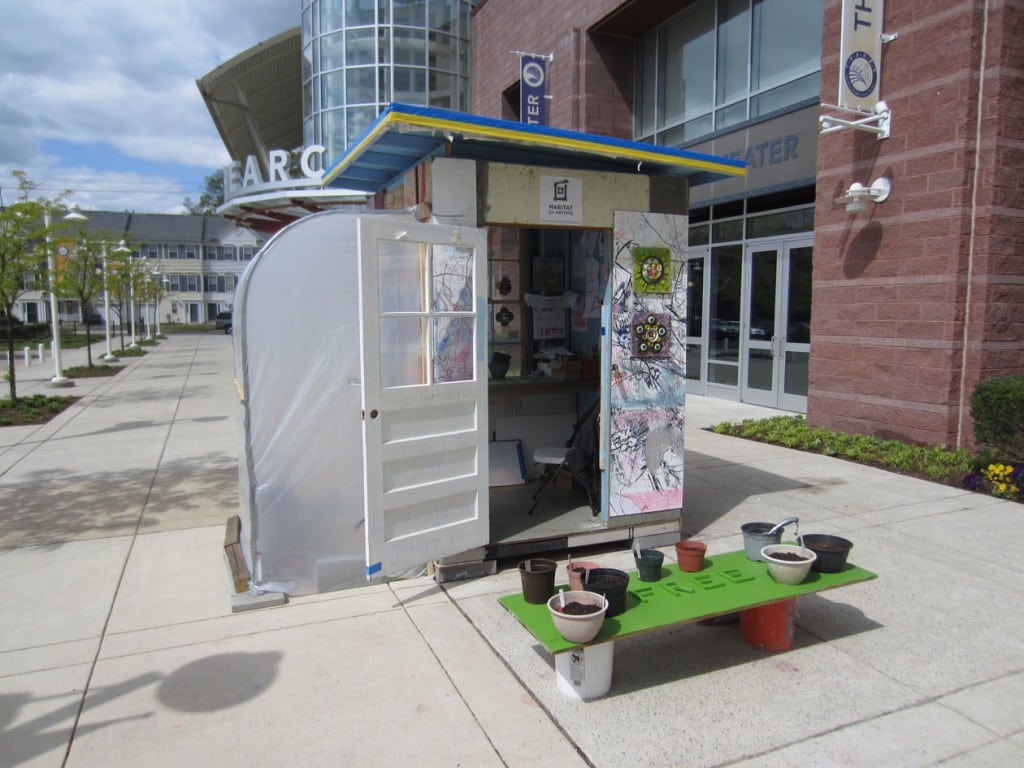 Michael Asbill turned the habitat into a mini-greenhouse, where his visitors could plant seeds (generously donated by Hudson Valley Seed Library). Jessica Poser created The Mending Wall with many small pieces of fabric and spent her week sewing, mending and telling stories with her visitors. For the final week, Simon and Todd Sargood took apart and then rebuilt a new habitat to leave with THEARC in their garden.

Aside from collaboration and public engagement, the small HFA studios provide the space for artists to explore their creative needs but also act as a metaphor for thinking about our own domestic needs. How might we be more creative about our consumption of materials, our use of energy and land? Could we be doing more with less, yet still create a vibrant, relevant society and culture? HFA asks us to consider the questions: How much? How little? The space to create.