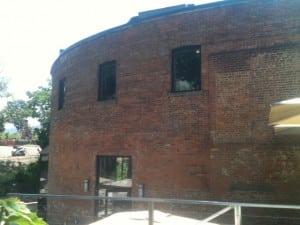 Swift, the showcase restaurant housed in Beacon’s eagerly anticipated Roundhouse Hotel, opened Wednesday evening. The restaurant’s unveiling, in combination with the May opening of The Patio, The Roundhouse’s light-fare outdoor alternative, renders most of the hotel’s food venues operational, even though it doesn’t function as a hotel quite yet.

The demands of running two kitchens are just a taste of things to come for the McAlpine Construction family, who own and operate The Roundhouse. With target dates that offer little downtime, they’ll be rolling out guest-room and event operations between now and September.

The arrival of The Roundhouse offers a turn in the spotlight for Beacon that is being compared to other moments in the city’s renaissance, most notably that of the opening of Dia:Beacon in 2003. The comparison becomes especially apt when considering the superficial attributes of the two facilities. Both are housed in former industrial sites repurposed as cultural destinations. Together, they flank Main Street, which is dotted with enough art galleries to qualify it as the premier artists’ colony of the Hudson Valley.

Brendan McAlpine is the son of McAlpine Construction’s owner, Bob. After choosing not to join the family business and opting instead to practice law in New York City, Brendan was ultimately drafted to the Roundhouse project after his father became seduced by the derelict Matteawan Manufacturing building on the banks of Fishkill Creek in 2009. Brendan’s official title these days is Food and Beverage Director, but his involvement in fact touches on every aspect of The Roundhouse. “It’s such a shame. That would be such a great building to rehabilitate,” he said, recalling his father’s initial reaction to the site. 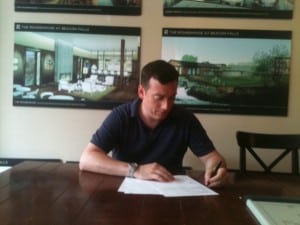 As it happened, timing was in Bob McAlpine’s favor, since the complex, then owned by a group that included the late developer and Main Street visionary Ron Sauer, was up for sale. Brendan originally joined the Roundhouse project to assist in McAlpine’s offer to purchase. That transaction was helped considerably by the city of Beacon.

“The city was great to work with. They were very excited about the project. So we worked collectively to get through that whole approval process in less than five months,” said Brendan, indicating a timeline for approval that was unusual in McAlpine’s prior ventures.

It would be understandable if visitors to The Patio who glanced upward at the building’s convex exterior experienced the optical illusion of standing at the base of a castle turret. That trick to the eye is strengthened by looking down to watch the currents of Fishkill Creek lap against the building’s foundation and feeling the sensation of being surrounded by a moat. The visual drama of the building is not lost on the arts community of Beacon.

“The building itself is ​​artwork. And what they’ve done in terms of preserving the original elements, it’s ​wonderful,” said artist Barbara Riddle, who, along with her husband Steve, owns the Marion Royael Gallery on Main Street.

That kind of glowing validation from the arts community is in part inspired by The Roundhouse’s inherent affinity with art and the people who create it. Aside from serving as a place that will provide lodging for cultural tourists, there are five live/work artist condominiums on the site, all of which have already been sold and are now occupied. This, in combination with The Roundhouse’s own curated art collection, provides the McAlpine family with enough cultural bona fides to win the embrace of Beacon’s creative community. 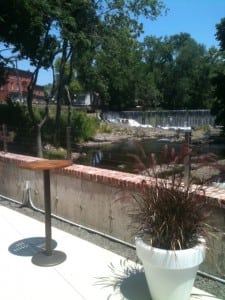 View of Beacon Falls and Fishkill Creek from the patio.

The Roundhouse is really a complex comprised of four buildings. Besides the “Roundhouse,” there are three other structures on the east bank of Fishkill Creek, all of which, except for the completed artist live/work condominiums, are in the process of being rehabilitated from their former state of decay.

The Waterfall Room, an event space situated on the north end of the property, will have floor-to-ceiling windows looking out onto Beacon Falls. Although The Roundhouse itself will have some lodging accommodations, most of the guest rooms, as well as a spa, will be in The Mill, which will not open until 2013.

“For everything we do, our motto is just do it but do it the right way. There’s just such attention to detail,” said Brendan, describing his family’s approach to the finishing touches of the Swift dining room, several days before its opening. The “right way” in this case involved the recruitment of local artisans for many of the fixtures and furnishings. Lighting in Swift was provided by Niche Modern, a local artisan light-fixture maker. The tables were provided by local furniture maker Jessica Wickham.

Back at the Marion Royael Gallery, comments about the McAlpines’ combination of good taste and local artisan boosterism assumed an ever-increasing tone of appreciation. “Everyone knows that this is really fabulous,” said Barbara Riddle. Verbal accolades from the community are certainly an indicator of enthusiasm. But if “Roundhouse fever” were instead measured by the early reservations for the Waterfall Room, it’s worth noting that the very first event in that space will be a 40th-wedding-anniversary celebration. The couple doing the celebrating will be Brendan McAlpine’s parents.