Revolutionary relic takes visitors back to 1777 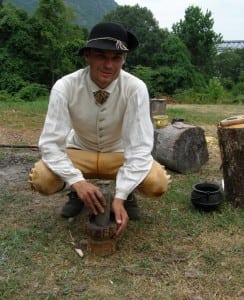 Day trips can take hours to reach by car, train or bike, but destinations close to home can deliver rewarding experiences without the expense of extended travel time. The Fort Montgomery State Historic Site, located in Orange County and a few minutes from the Bear Mountain Bridge, preserves a chapter in Revolutionary War history dating back to 1777.

On Saturdays and Sundays through July and August, visitors can tour the remains of Revolutionary War fortifications and learn more about the site’s rich history and purpose through guided tours, artillery demonstrations and living history camp life exhibits. Grant Miller, in his fifth year as historic site manager for the facility, will be among the interpreters leading tours that begin at 11 a.m. and 2 p.m.

“This piece of land was fortified with the idea to blast any British ships coming through this area of the Hudson,” Miller said as he looked out over the striking view of the Hudson River where British ships were anticipated to arrive in 1777. “The Americans knew the British were coming, and Fort Montgomery was undermanned, but the American defense fought to repulse the attacks.”

Though the American Patriots lost Fort Montgomery as well as ​​​neighboring Fort Clinton in the October 6, 1777 battle, historians credit the Patriot forces with delaying the greater British mission to the north at Saratoga. Fort Montgomery was named in honor of Maj. Gen. Richard Montgomery, who died leading a charge December 31, 1775 in Quebec. 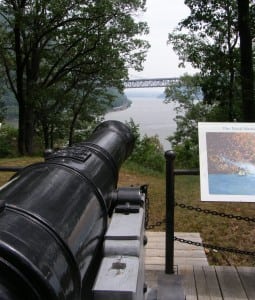 American soldiers manned massive cannons at the Grand Battery to defend the area from the British. Photo by M.A. Ebner

Designed to protect the Hudson Highlands area and control Hudson River access, Fort Montgomery was captured by the British expeditionary force, which destroyed the fort’s barracks and other structures as well as the powder magazine after the battle. The ruins of Fort Montgomery reveal the fortifications and infrastructure built by soldiers. Most of the remains were recovered through archaeological endeavors that took place generations after the Battle of Fort Montgomery.

“Much of the research of the fort was done by Jack Mead,” Miller said. “He started digging in 1967, and until 1968 or ’69, the remains of the barracks were completely buried. Time takes its toll on everything, but this was all placed by soldiers. We now have a 14-acre site that was at one time overgrown like a jungle. Finally, in 1997, a group of local people formed the Fort Montgomery Battle Site Association to move the project along to what we share today.”

Visitors to the summer weekend events can hike along a trail of linear patterned stones laid by Patriots sometime around the spring of 1776, man the lookout at the Grand Battery overlooking the Hudson, or try grinding their own corn flour to make fire cakes, which were simple cakes that soldiers prepared with wheat flour or corn meal and water, and baked over the camp’s fire.

​​​Historic site interpreter Peter Cutul demonstrates Revolutionary-era life and teaches visitors the process used during the period to prepare food for the troops.

“The kids on tours and especially kids who join us for camps like to try to make their own corn flour,” Cutul said. “Basically, we burn out a tree stump for our mortar, and the pestle does the grinding. Corn flour was important to the Native Americans and the Colonists as well. Soldiers would commonly make these simple cakes.”

Visitors learn about the fort's history through tours including remains of barracks (pictured), the Powder Magazine, stone trails, and privies. Photo by M.A. Ebner

The Fort Montgomery Historic Site features a museum that opened in 2006, a 15-minute film on the Battle of Fort Montgomery (shown on demand) and walking trails with descriptive displays (including illustrations created by Jack Mead). The historic site is located half a mile north of the Bear Mountain Bridge at 690 Route 9W, Fort Montgomery.

Admission is by donation to the Fort Montgomery Battle Site Association. Regular hours to visit the museum and take self-guided tours are 9 a.m. to 5 p.m., Wednesday through Sunday. For more information on tours, outreach programs or special group reservations, call 845-446-2134 or visit the New York State Office of Parks, Recreation and Historic Preservation website.